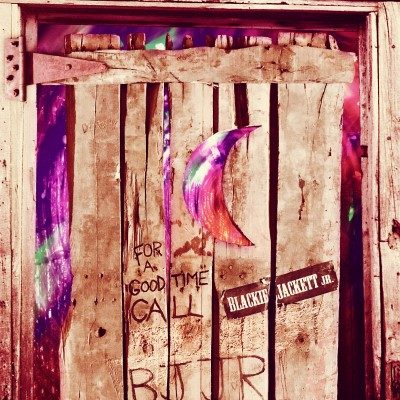 I first heard of Blackie Jackett Jr. through the 94.9 Generation Next shows put on at the Phoenix Concert Theatre in Summer 2017. Forever wary of country music as a collective, I admit at the time I tried to walk into their set with an open mind (and an open beer). From the very beginning, they had the crowd in the palm of their hand and I threw out my reservations and joined in the impromptu square dancing that frontwoman Sandra Dee instigated, flashing a grin, all blonde temptation and denim flair. So naturally, when the opportunity to review their album came around, I jumped at the chance to see if they could capture their raucous stage persona on record.

Opening track “Bender” gets right to it, jauntily skipping along, telling the tale of a sinful soul meandering through all sorts of trouble. It really sets the tone for the album, following the blueprint of a hazy, whiskey-swilling group of good folks looking for a great time, no holds barred. “I swear one day I’ll quit”. Ha, not likely.

Lead single “Stuck In rewind”, opens more methodically. The story of a couple down on their luck, so sure they can’t stay together, but always ending up right there. Life’s cruel twist of fate. A cacophony of select stringed accompaniment delicately supports the strong narrative, a well-crafted and firm appetizer for the rest of the album. This segues nicely in the ponderous and warning “Dorothy”, the story of a vain temptress, no doubt, seeking to entrap the helpless male protagonist.

Suddenly we get a bit of tongue and cheek with “The Weed Guy”, a honky-tonk rocker about (you guessed it) waiting for your dealer to show up with an ounce of buds for you and your buds. Not much to read into here, but the struggle is real, am I right?

“Promise to Deliver” sports a meandering banjo line at its forefront, a lovely textured song that speaks of longing and of making the effort, all supported by a pounding bass drum. It jumps swiftly into “Mad”, a bouncy ballad about a special woman in a man’s life, who may or may not be a tad ticked off. Again, the narrative takes centre stage, a persistent theme throughout much of the country music this writer has experienced.

“Daytime Drunks” is another rocker of sorts, you can’t help but bop your head. With catchy hooks and the potential for some amazing sing-along parts as well, this track stood out for this writer in particular (and yes, I do like whiskey too). “Catatonic Love” whistles by, at times slow as molasses or breezy as the summer wind. Beautifully transitioning into “To See Your Face Again”, a ballad of wistfulness, aching to see your lover one last time, floundering without them.

We launch back into the danceable tunes, you just want to swing your partner round and round to “This Girl Is Mean”. It’s evident that our lyricists have a panache for choosing the wrong muse from amongst the bar room crowd, but down that next round and get back out on the floor because this song has you by the chin from the start. We can’t quit bouncing yet, as the album closes out to “Drunken Eyes”, an ode to the rose-coloured glasses and tipsy grins, so raise your glasses high and hum right along to this catchy melody.

Overall, Blackie Jackett Jr. don’t stray too far from the mold, while still dishing out a strong, well polished, and rocking album. An unapologetic country rock offering, For A Good Time Call is all whiskey, women, and that Western soul. Raise a glass and get dancing folks!