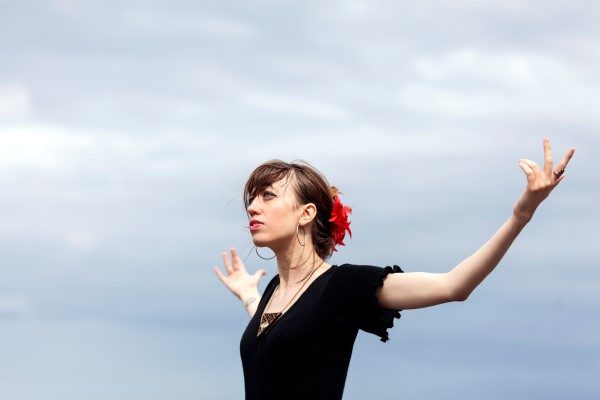 Montreal based Singer-songwriter, Ziggi Jadovsky has teamed up with us to premiere her video for “Morning Dread”. The single is produced in collaboration with film director, JP Charlebois and video editor, Lu Fournaison. Take a few moments out of your Friday and check out the video below, and find out more about Ziggi in our Five Questions With.

When asked about the video, Ziggi shares,

“I’m pleased to announce the release of the music video for my track, “Morning Dread”, a Blues-Rock ballad about waking up with anxiety about the future and feeling shame about the past. With some head-banging moments I hope this will be a cathartic experience for the listener, as writing the song has been for me.”

Hi! I’m Ziggi Jadovsky, a singer-songwriter based in Montreal. I was born in Portugal to an English mother and Canadian father and moved here at the end of 2015 to explore my Canadian roots. In Montreal I met The Firing Squad, a Jazz-Funk trio made up of Gideon Yellin – guitar, Lloyd White – bass and Alex Lepanto – drums. They back my live shows and have supported me on my upcoming EP.

We create songs of the Jazz-Rock ilk (with hints of Blues and Ska) and our music has drawn comparisons to artists like Jefferson Airplane, Tim Buckley and Hiatus Kaiyote. In a nutshell: it’s jazz-rock with shouty vocals!

From the outset, as a songwriter, my writing style has been collaborative, and Morning Dread was originally co-written and recorded with a group of musicians from London, UK (Zack Woolfson – guitar, Ruben Vriend – bass and Vic Meadowcroft – drums).

In rehearsals, I always bring words and generally a melody to improvise around with the musicians until we find something that sticks. I’m not very married to set verse lengths – story and images matter more to me – so this presents an interesting challenge at times for the musicians!

Yes, I’ll be performing with The Firing Squad on Friday 25th May at Theatre Sainte Catherine as part of Sister Singer, an event which I co-produce with Hip-Hop artist, Shades Lawrence, to celebrate female and non-binary-fronted music from Montreal.

In terms of what to expect from Ziggi Jadovsky live, here’s a direct quote from an audience member: ‘a lady Sublime….insane energy’

I don’t know what happens but at times it’s like I’ve taken a truth-serum and lots of honest words seem to spill out of me (I swear a lot too, so it’s not family friendly!) Creating a safe space to do this is as important to me as having fun. I compare being a front-person to the role of a host: you’re welcoming your guests into your weird and wonderful world and I see it as a generous, reciprocal act. I don’t hold back on my opinions though and I don’t expect an audience to hold back on theirs either.

I also like to find new, enjoyable ways of engaging an audience through participation. Time onstage is my favourite part of being a singer and it’s my chance to connect with people. I want a performance to shake you up and energize you, so it’s pretty much the opposite of a shoe-gazing affair.

One audience member said I gave her goosebumps, which was a real compliment for me as this is the kind of effect I’m looking for.

I’ve recently tried to get better at speaking to the audience in French too, after encouragement from a few people to be more accessible (yep, I have an accent!)

My song “Goblin Shark”, appearing on my upcoming EP, Shadow Roots, out this Fall. It came to me while I was sitting under a tree (trees are a big source of inspiration – hence the EP title, Shadow Roots).

The song epitomizes what I’m trying to communicate with my music. I want it to be a space for people to grieve and simultaneously connect with their awe for the natural world, which is really important to me and whose current destruction I think we, in the Western world, can sometimes feel numb to because it doesn’t seem like an immediate threat. It’s also a much gentler and folkier song than some of my other ones, though being an emotionally-charged subject for me I still get a bit shouty towards the end!

I LOVE Melissa Laveaux, am totally digging Feist’s new album and I know we said ‘current’ but, being a 90s girl, I’ve always got to mention my soft-spot for Alanis Morissette (I imagine I’ll still be rocking out to Jagged Little Pill in years to come).