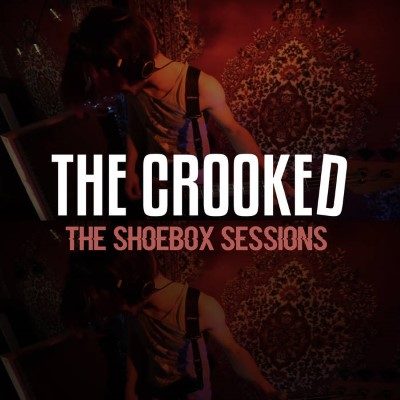 After making their debut just over a year ago, Toronto’s The Crooked have been causing quite a stir with performances across southern Ontario and with the release of three music videos.  The rock outfit, consisting of frontman and guitarist J.C. Sandoval – formerly of Die Mannequin – bassist Russ Shipman, lead guitarist Neelesh V, and drummer Dell Orso, have now released their debut EP, The Shoebox Sessions, a three-track record named after the studio in which it was recorded in.

Opening with “Glove”, the most recent of the band’s music videos, The Shoebox Sessions starts with a slightly funkier step.  While each song on the record is nothing short of great, this may be my favourite of the three as it carries a sense of identity that is stronger than the other tracks; it’s a hard-hitting song full of fuzzy guitars and ripping lead lines, but there is a lightness to it that stems from the band’s focus on keeping things groovy. “Glove” embodies a balance between grungy alternative rock with pop sensibilities that will leave the listener more than excited for what is to come from The Crooked in the future.

“Tarot Cards” follows a similar idea in that it is a rock tune driven by Latin-inspired rhythms.  Where it is less common for rock bands to delve into Latin territory, this also likens the track with pop music, but in a lesser sense.  “Tarot Cards” is much more rock based however as it features a much more driving chorus along with weaving guitar lines.  It is yet another great song that is highly unique.

To conclude the record, The Crooked goes into the grungy and glossy “I Didn’t Know”.  At times, this is the heaviest track on the record full of sludgy guitars, but the vocals give the song a more polished tone.  The song has an anthem-like quality to it while also feeling very much inspired by the chaotic nature of Nirvana.

All in all, The Shoebox Sessions is a very strong debut from The Crooked, a band who can very well be among the top of Toronto’s rock scene.  Where the record is only three songs in length, it leaves the listener wanting more.  Rather than be disappointing, the three tracks are incredibly exciting and with a unique songwriting voice along with excellent recorded performances from each member, The Crooked shine on a very impressive debut