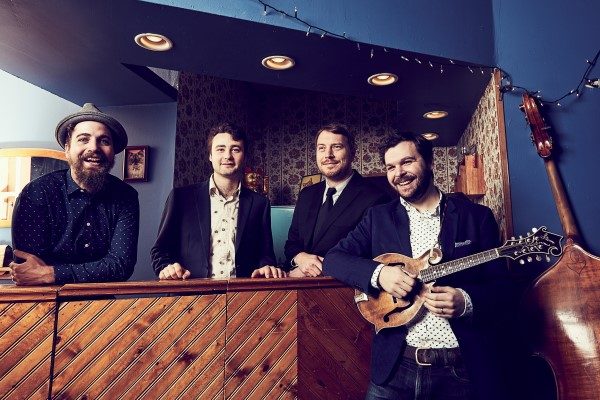 The Slocan Ramblers are taking off on tour this month as a pre-launch to their new album, Queen City Jubilee, which is set for release on June 15, 2018. During the tour, the fans will not only be able to hear the new songs live, but they’ll have the opportunity to purchase advanced copies of the album at each tour stop.

Today, the band has released a video for their track, “First Train in the Morning” via Canadian Beats, and we couldn’t be happier to be a part of this release.

We asked lead man, Alistair Whitehead about the single, he commented,

“This is an original song of mine called First Train in the Morning. Its an old song that we revisited when we were making this latest record. Its written from another persons perspective but is essentially about having to leave home to really appreciate what you have. The video is done in the same studio where we recorded the album, pretty much in the same fashion. We wanted to capture the vibe and energy of our live show on this album so we recorded it just like we recorded this video, live off the floor all in the same room. We are really happy with the results!”

Check out the video below, and find out more about The Slocan Ramblers via our Five Questions With segment. Also, be sure to check out the tour dates at the bottom of the post!

My Name is Alastair Whitehead. I am the bass player and occasional singer in the Slocan Ramblers

The music I play with The Slocan Ramblers is primarily Bluegrass, but we often try and push the boundaries a bit incorporating a lot of other styles into the mix. We definitely all have a strong love for traditional bluegrass and old-time music, so I would say that that would be the undercurrent that is most characteristic of our sound and ties everything together. In terms of my writing style, I wish I could say I have a consistent style. Unfortunately, I’m a little all over the place in that regard. Sometimes an idea comes along and twenty minutes later you have a complete song, other times a song will take over a year to work itself out. I always make a habit of recording any kind of melodic ideas I have on my phone and any lyric or writing ideas into my lyric book as soon as they come to me. I often get lots of little snippets of inspiration on the road, but don’t always get the time to flesh it out. When I get home from tour I’ll go back through my notes and voice memos and see if I had any decent ideas. Often the best ones are the ones I completely forgot about. In terms of the band, all the members of the band write. We tend to come in with pretty complete ideas, and then work up arrangements, harmonies, solos etc. as a band. We don’t do a whole lot of co-writing but it’s definitely something we have chatted about experimenting more with in the future.

We are just about to release our third full-length album Queen City Jubilee so It just so happens we have a number of shows coming up starting in Niagara Falls on April 13th and then a month-long tour from Saskatchewan to BC shortly after that. We perform pretty much in the traditional bluegrass style, singing around one big microphone. There is a big tradition of live performance in bluegrass, and most fans of the genre would definitely say it’s a style of music best appreciated in a live setting. We pride ourselves in an energetic live show that features a wide variety of music from some old school traditional numbers, to contemporary original music and everything in-between.

First Train in the morning is a track that I wrote that is featured on our newest album. I think it’s a great example of the influence of old-time music on our original material. I’m really happy with how this one turned out.

I’ve had The Lonesome Ace’s newest album When the Sun Comes Up on non-stop in my truck for the last month. They are such a great band and another great example of a group writing original music in the old-time style and tradition. It’s definitely worth checking out that album or better yet seeing them live if you can get the chance!