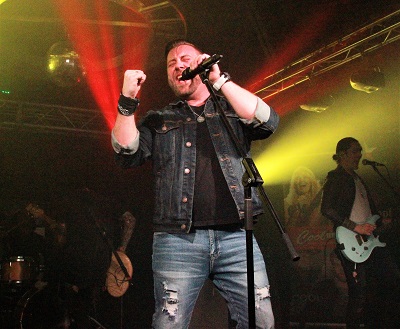 If the name Brandon Scott sounds familiar to you, it’s because he is the former lead singer for Canadian Country band, Cold Creek Country. Having parted ways with the band a little over a year ago, Scott found himself at a crossroads not sure if he should continue down his musical path.

Scott began a house painting business shortly after the split. He was cleaning up the shop that would be his office and found a compass medallion with a message attached that read:

“Each Day is a journey, take one step at a time with true friends that support you on each challenge along your path. Whatever direction you go and no matter what comes your way, I hope your journey through life brings you happiness every day. Life has a funny way of changing directions and taking you on a journey you may have not thought possible. Difficult roads can lead to amazing destinations”.

This message struck a chord with Scott and it was at that moment, he knew that his path was still music. He drilled a hole in the medallion and wears it on a chain around his neck as a reminder every day.

Now, a little over a year later, Scott has been making a lot of “Noise” across Canada since he announced the upcoming release of his debut solo single. On Friday April 6, 2018, fans were introduced to the song through major streaming platforms and is now available to radio. This song is the perfect launch for Scott. It is driving, upbeat and ready for summer air play.

As part of the celebration, Little Texas was home to a launch party, hosted by Belleville’s Cool 100 on Saturday April 7, 2018. Originally, the event was to take place at Signal Brewery. However, the demand for tickets was so high that the event had to be moved to accommodate a larger crowd. Fans got the chance to see Scott’s first full band performance as a solo act and an exclusive first view of the official music video for ‘Noise’, set for release in May.

It was certainly a who’s who in the crowd and great to see support from fellow industry friends, Chris Labelle (River Town Saints) and his wife, Julie, Jason Benoit, Leah Daniels, Tim Deegan and Instant Rivalry to name a few. Scott had a killer band to back him with Richard Beddoe (drums), Greg Keyes (guitar), Stuart Weinberg (guitar/banjo), Justin de Graaf (bass) and Tyler Wilkinson (guitar). Wilkinson has been a significant part of Scott’s return to music. The two have written many songs together for this solo project.

The music video is directed by Tim Deegan, who many of us know as the director for several of Leah Daniels powerful music videos. This video takes place in areas around Brighton and Belleville, were he calls home. From shouting from the rooftop to performing to a crowd of fans at Little Texas, the music video for “Noise” makes one bold statement – Brandon Scott is back and ready to show country fans what he’s made of.

If you like the song, please request it at your local radio station and follow Brandon Scott on his social sites.