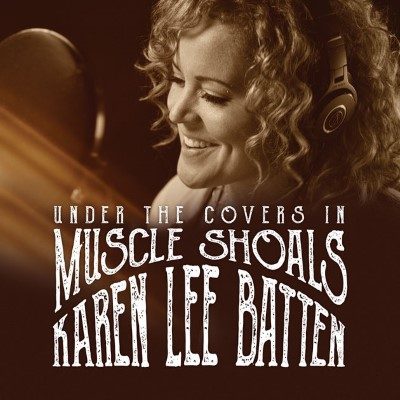 Award-winning country singer Karen Lee Batten released her fourth studio album, Under The Covers In Muscle Shoals, this past March. The British Columbia-native recorded the 11-track release in Muscle Shoals, Alabama at the iconic Fame Studios and The NuttHouse; the same respective studios that produced hit records by Etta James, Bob Dylan, Lynard Skynard, to name a few. A bounty of instruments fill the sound of the album; an album poised to be her most successful to date.

Slowing things down is her take on Aretha Franklin’s sultry ballad “Never Loved A Man” and then onto “Serve Somebody”, a cover of Bob Dylan’s 1979 hit Gotta Serve Somebody.  The soothing melody of “Do Right Women” has Karen on another Aretha track and does it well.

Slick guitars and sassy vocals fill the air her cover of The Black Crowe’s “Hard to Handle” while “Let It Rain” is a gorgeous and heartbreaking ballad from that really showcases the power behind her voice. Then onto more of a blues take on the Skynard classic “Sweet Home Alabama” before ending the album with the somber Paul Simon ballad, “Tenderness”.

With an energy in her voice resembling country powerhouses like Faith Hill and Carrie Underwood, Karen Lee Batten is a force to be reckoned with. Taking on iconic songs like these is no easy feat – lucky for Karen, she has the voice and the confidence to pull it off.