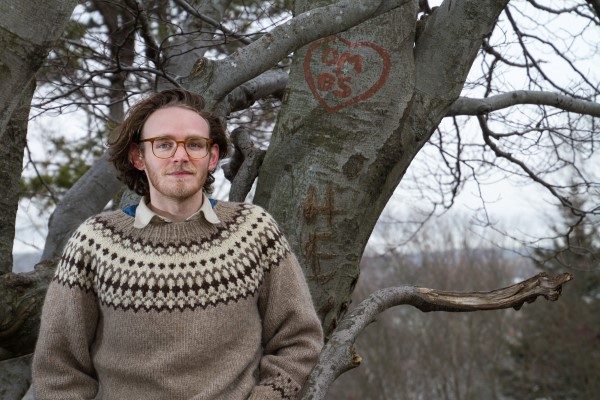 Hi all, this is Daniel Walker and I perform/write music as Owen Meany’s Batting Stance.

I was actually in attendance during the ECMA 2018 Nomination Announcement event a few months ago when I found out. My reaction was physiological; I felt a flood of positive emotions and a big old grin represented what I was feeling inside. This nomination, for me, acknowledges, and in a certain capacity validates so much of the unquantifiable energy that has gone into OMBS over the years.

This will be my second year attending the ECMAs having taken part in their ‘Break Through Stage Mentorship’ program last year.

My parents live in Ontario and they will be spending some time on the East Coast over the ECMA weekend. We’ll all be going to the Awards Show together and I’m most excited to share this experience with them.  I miss them all the time, but they appreciate how much I love and identify with this supportive this east coast community.  Having these two important but detached parts of my person together will feel a certain kind of special.

Otherwise, I’m really excited to run into pals and see some shows. These conferences are sort of like summer camp, catching up with pals you see maybe once or twice a year. I’ve found the whole experience of getting through these conference heavy weekends (with delegate meetings, industry mixers, showcasing) often brings us closer and I look forward to whatever iteration of bonding comes from the week.

We will be performing during the ECMAs, however, all the details we have right now solely are associated with the ‘Rising Star’ stage. As of this post, the final schedule is still being finalized so location and number of showcases are still to be determined.

When we’ve got a full band line up, which will be the case for the ECMAs, an engaged, energetic, and purposeful performance would be descriptions that I hope those who have seen OMBS before would come to expect.

“Growth” because it’s the recognizable ‘hit’ from our first record as well as more of a stripped back song with simple instrumentation giving more space to the lyrical content.

“Charlotte’s Gossamer Awaits” also slots in there. Under 2 minutes, it’s our cover letter song reflecting the punchy, melodic but paced style which is common in most OMBS songs.

Also in PEI, Sorrey, Al Tuck, and The Burning Hell are three personal favourites while Jon Mckiel (NB), Julie Doiron (NB), Kim Harris (NS), Gianna Lauren (NS) and Hello Delaware (NS) round out the more mainland contingent of ‘go-tos’. Thom Coombes and Kat McLevey are my two picks for heavy listening on the NFLD side.

Patience but not complacency, especially in regard to approaching industry conferences such as the ECMAs. These events give you the opportunity to meet a variety of industry professionals from many territories, record labels in Hamburg, publishing/sync company in the UK, a delegate representing a huge booking agency domestically. Often, nothing concrete appears from these encounters and that can be discouraging. But, things happen when they are supposed to happen. When you’ve put in the work, then you’ll put yourself in the position to get noticed and get lucky. All that luck that comes later originates from believing in what you’re doing and persevering through the initial years of development when most validation comes from within. This is the point when you question yourself the most, momentum feels stagnant, and the horizon looks the same shade of monotonous beige as it did yesterday. Those are the most important days to send the emails that you’ve been avoiding or thinking about sending for weeks.

Next week (March 16th) OMBS is heading to the studio to record our sophomore record with Palmer Jamieson (Beauts, Valerie). This record will feature some incredible guest contributors and I’m really excited to be spending the next month and change on this endeavor.

Additionally, OMBS recently signed a record deal with a label in the States (TBA). They’re going to be instrumental in the record release (which is slated for fall 2018) and are currently booking a US tour for OMBS in June/July. Come the fall, OMBS has our sights on doing another run in Europe around Reeperbahn and then a healthy amount of Canadian touring once the record is eventually released.