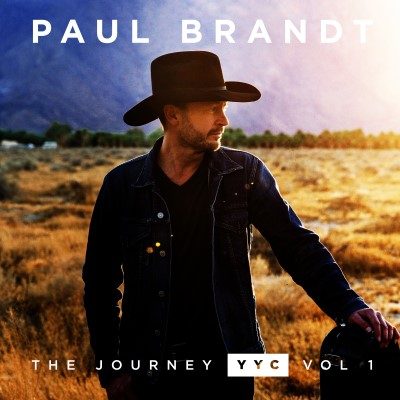 Warner Music Canada recording artist, Canadian Country Music Hall of Famer, Western Canadian Country Music Hall of Famer and the most-awarded male Canadian country artist in history, Paul Brandt, has released his newest collection of songs. The Journey YYC: Vol. 1 is the first of two EPs to be released in 2018. It has six tracks that will leave you wanting more. Paul Brandt co-produced the album in Nashville, Tennessee, with Ben Fowler.

The first track, “The Journey,” is upbeat yet reflective and leaves you feeling good about life.

“YYC BNA” is a special song for Brandt. This one is a catalyst for the spirit of not just this album but also his upcoming one – and of life. It recounts a bittersweet reflection that took Brandt from Calgary to Nashville. Will he “ever be Alberta bound again?” Says Brandt,

“Calgary and Nashville are the only places I’ve ever called ‘home,’ and those two cities bookend my journey in life so far.”

His current single, “All About Her,” is a pop-infused anthem which Brandt says gelled quickly.

“I greatly respect the co-writers on this song, so working with Seth Mosley and Ben Stennis was a dream come true for me. The more we got to know each other, the more it was clear that our wives are incredible inspirations to us, each in their own unique ways. We wanted to write a song that would celebrate them and the thankfulness we have for being in their lives. Once we began moving in that direction with the song, it kind of started to write itself. I’ve found the best songs always do that; they ride the emotion and spirit of the idea.”

This album shows Paul Brandt at his finest and it’s one you will want to have on your playlist.