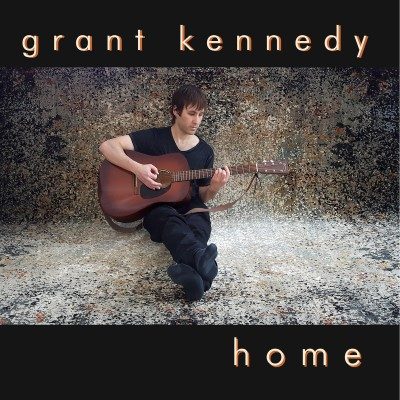 For Grant Kennedy, Home isn’t just a place to raise his family – it’s also the name of his debut album. An album that was in his head for years while he worked on his professional career. The collection of eight songs was recorded in his two-story home and features Grant not only singing but playing guitar, bass, piano, trumpet, and even the glockenspiel.

The Alberta-native wrote every song on this album – using his home to record every detail to create the warm and inviting melodies that surround these songs.

Grant introduces us to his sweet voice in “The Wolves” where he delivers a beautifully rhythmic melody and a story about growing up in the Canadian prairies – before putting an unexpected western spin on “Amsterdam” which feels like that melody you hear in that classic film scene as the main character begins to embark on their epic adventure. “Once in a While” is vulnerable in its feelings and “Summer Solstice” introduces the piano and drums to elevate the song above the acoustic-heavy melodies heard so far. Then comes “Hear to Tofino” which is another paint-a-picture story that Grant effortlessly tells his listeners. “Ella” is perhaps the most personal song off of the entire album- written for his first born child and every bit as emotional and lovely as predicted.

Nearing the end of the album, “Soldier On” plays a heavier tune, and we end with the loveliness in “Nowhere Fast”, with lyrics like “Home is where the heart is, make it great.” A twist on the typical meaning of the title phrase. If it wasn’t already clear to us, Grant is very much a product of his home and his family.

For his debut album, Grant Kennedy has a firm hold on his sound and the lyrics he creates. Even more impressive is the fact that these songs were recorded in his home-turned-recording studio – according to his website he even out microphones in his shower to capture the acoustics for “Amsterdam”. Here’s hoping he continues to pursue his music – I can’t wait to see the stories he comes up with.