Review – Rosie and the Riveters 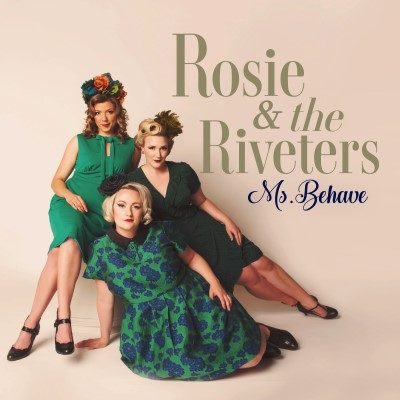 The music world consists of musicians and acts.

A musician is a person who writes, performs, records, and creates music in a variety of way presenting themselves on and off stage as, essentially, the same person.  Other musicians have created acts, a personae or character, either sustained for a career or changing from album to album, tour to tour, who is the embodiment of their musical message.

Then there are the musicians who have acts who appear as though they are created, an expression of their musical message which, instead, is that musician’s unique personality and self-expression, the artists who self-define themselves based on their worldview and their worldview alone.

Dear reader, allow me the pleasure to introduce you to Rosie and the Riveters.

Rosie and the Riveters is a Saskatchewan-based close harmony singing group with a boogie-woogie aesthetic, a country spirit, a folk soul, and a poet’s heart.

To call this group “one of Saskatchewan’s best-kept secrets” is, luckily for the rest of the world, becoming a misnomer. Based on their sellout shows across Canada, performing for British Royalty, and numerous accolades, including a 2016 Saskatchewan Arts Award, Rosie and the Riveters are taking their captivating sound and live show to the front lines of music fandom displaying an earnestness and sincerity often lacking in modern music acts.

Onstage armed with guitars, ukuleles, red lipstick, pin curls and pearls (they may have never worn pearls, actually, but pearls would not look out of place with their styled dresses) Rosie & the Riveters embrace the dichotomy of femininity and defiance by being the truest form of themselves.

(As a companion piece to this music review, check out Joelle Jones and Michelle Madsen’s wonderfully beautiful, and violent, comic Lady Killer about a 1960s pearl-wearing house in the suburbs who is also a hired assassin. Ms. Behave would be an excellent comic character name, as a gritty noir-style private investigator.  Just putting that out there…)

The album Ms. Behave, not the non-existent detective pulp-noir character, retains the expected closed harmony sound and do-wop feel of Rosie and the Riveters with a sonic palate containing soul, country, and folk mixed with swagger, sultriness, and style.

The title track “Ms. Behave” is sultry and bluesy, Bill Withers in heels, whereas “Gotta Get Paid” is  confident and cocky (is that the correct word for this review?),  the assured swagger of a confident woman knowing her worth and, instead of asking for her due, is demanding it.

“I Wanna Do Nothing With You” is romantic and sweet with sweeping string lines, gentle strumming and soft brushes creating a song that Wes Anderson should include on an upcoming soundtrack to “I Believe You” a timely and reassuring support to victims of sexual violence.

The country travelling feel of “Life is Good Today” naturally contrasts with “La Boheme (Dweet Doo)”, which could be Rosie and the Riveters’ tribute to lost fingered sensation Django Reinhardt, where “Ask A Man” discusses “mansplaining” with effective humour and wit.  (Should I be concerned that “mansplaining” was not autocorrected?)

“Good to Me” is heartbreakingly honest.  It just is.

Not to be ones to rest on their laurels, Rosie and the Riveters also invest twenty percent of their merchandise profits, over $9,000 to date, to finance initiative for women in over 150 projects around the world to establish, or expand, self-sustaining livelihoods.

Ms. Behave, from track to track, displays the multi-faceted sensibilities of Rosie and the Riveters and their diverse musical, and personal, interests being the next best ruined musical secret.  Now you are in on the secret, too!

Rosie and the Riveter’s newest album Ms. Behave is out today on all digital platforms including Spotify, iTunes, Apple Music, and Google Play and can be purchased physically in Canada and the U.S. through their website at your local brick and mortar music store.  Keep up to date on everything Rosie and the Riveters at http://www.rosieandtheriveters.com/.  Support Rosie and the Riveters in their philanthropy work by going to KIVA.org.