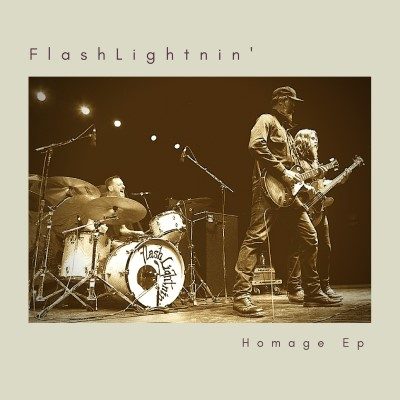 After attempting to hold the group together following both members going different ways, with Darren Glover moving to Victoria in 2015 and Darcy Yates taking time off to tour the world with Bahamas, Flash Lightnin’ are breaking up. However, the Toronto based rock duo is not doing so quietly as they release their fourth and final EP, Homage, four classic rock covers from artists who not only pioneered the genre throughout the 1970’s but are of a collective that is often – and wrongly – unsung in modern collective memory.

Flash Lightnin’ open their swansong with Peter Green/Fleetwood Mac’s “Green Manalishi”, a rhythmic jam overflowing with intertwining guitars and pounding drums. The song builds as it progresses and seems like the perfect fit to open the record and has a live energy to it with such a lengthy introduction that further adds to the feeling that this was a regular jam for the band.  The record then shifts gears as the band transitions into “Never In My Life” by Mountain, likely the most underrated group covered on Homage.  The track shows off a groovier side to the band over yet another riff heavy track.  Perhaps the strongest track on the record is Jeff Beck’s re-interpretation of The Yardbirds’ “Shape Of Things”: another track that feels like a jam over an acid infused psychedelic groove.  The track is flawless and not only stands as the best on the record but also has enough flair to cause Beck himself to take notice.  The record comes to a climactic close with Cream’s  “Swlabr”, a track full of rhythmic shots and starts and stops while also feature a killer guitar solo and subtle and tasteful lead lines.

Homage is an appropriately titled record and a fitting choice for a band to bookend their career.  Flash Lightnin’ have pushed the limits and helped shape the Toronto rock scene for over a decade.  Their choice to perform deep cuts from the likes of Cream and Jeff Beck highlights their position on the continuum as they bring these tracks – which date back to 1967-1970 – to the forefront and ultimately giving them a modern rock twist that is firmly rooted deep in the heritage of the blues.  Homage is as fitting as it is enjoyable to listen to, giving Flash Lightnin’ a proper send-off.