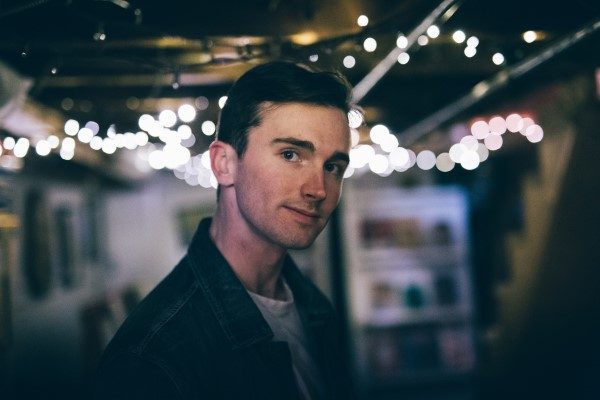 London ON-based folk-rock singer-songwriter, John Muirhead will be releasing a brand new single, “Passenger’s Side” tomorrow, but here at Canadian Beats, you’re in luck! You can hear the single and check out the lyric video below a day early! John was recently nominated for a Canadian Folk Music Award for Young Performer of the Year and will be touring and releasing new music throughout the summer, so stay tuned.

We asked John about the single, he commented,

““Passenger’s Side” is the first single from my upcoming EP, Foundational. The song is mostly about trying to overcome the feeling that maybe we’ve already hit our peak and the romanticism of leaving everything behind and starting new. I’m really happy with how the arrangement and recording turned out for this track, so I hope you enjoy it too! “

Find out more about John Muirhead in our newest segment of Five Questions With below.

Hi! I’m John Muirhead. I was born and raised in Georgetown, ON and am currently based out of London, ON. I like writing songs, petting dogs, and exploring the weird side of YouTube. I started playing solo about three years ago, and in that time I’ve travelled across the province and beyond to share my music in bars, theatres, and folk festival stages. I’m constantly writing and playing live, but I haven’t had an official release since my debut EP in 2016 so I’m very excited to be sharing a new tune.

I tend to write introspective indie-folk songs ranging from hushed finger-picked tunes to full-on folk rock. A few of my biggest songwriting inspirations would be Frank Turner, The Weakerthans, Leonard Cohen, and Bruce Springsteen.

I’ve been writing songs since my early teens for various bands and projects, and then kind of stumbled into the folk scene a few years ago when I starting testing new songs at open mics and coffee houses. I realized that I really enjoyed the freedom and the challenge of being a solo performer, so I started to pursue it a bit more seriously.

I try to write all the time and I’m always picking away at unfinished songs. I schedule as much time to write as I can, but I find the best songs come to me spontaneously. Every song is written a little differently, but they tend to start from guitar parts, then melody, and then lyrics.

I’m touring the East Coast in June. I’ll be playing on the train from Montreal-Halifax and back as part of the VIA Artists on Board program, and I’ll be hanging out and touring the Maritimes between train rides. The tour will be announced soon, so make sure to follow my social media to stay up to date!

I try to make every show feel like a late-night Canadian campfire. You can expect a show that ranges from hushed fingerstyle confessionals to rowdy singalong jams, with some storytelling in between.

There’s a song on my last EP called Sidewalks, and I always try to direct new listeners towards it. It’s a little on the sad and quiet side of my songwriting style, but there’s something indescribable about it that keeps me coming back – I feel like I relate to it in a different way every time I play it. The song is meditative to sing and play the guitar part, and it’s become a staple in my live setlist.

You can check it out here.

I feel really lucky that a lot of my favourite Canadian acts are actually friends of mine or acts that I’ve shared bills with. I’m listening to a lot of The Lifers, Oh Geronimo, Averages, Moscow Apartment, and Glass Cactus. I’m also a die-hard Arkells fan and have seen them live too many times to count.