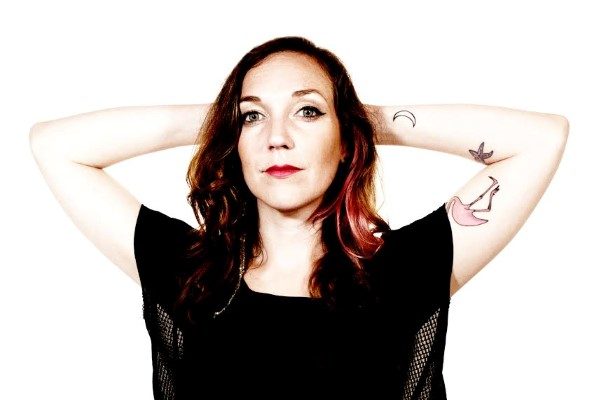 KINLEY is the solo project from Kinley Dowling. She is nominated for Rising Star Recording of the Year this year for her album, Letters Never Sent. We were happy to catch up with her to chat about her nomination, her live performance and so much more. Also, take a few minutes and check out her video for “Microphone”. It’s a song with serious subject matter that will hit home for many people. Give it a listen, and find out more about KINLEY below.

Hello! My name is Kinley Dowling. I play violin with Hey Rosetta! but I also have a solo project simply named KINLEY.

I couldn’t believe it! I was so excited! My friend Danny Ledwell texted me congratulations but I didn’t know what he was talking about. Then I saw that I had 19 Twitter notifications about the nominations. I was with my mom when I found out and I started squealing!

No way! I’ve been to the ECMAs almost every year for the last 10 + years???!! WOW. I love the ECMAs. They’re the best party on the East Coast all year.

I’m so excited to see so many friends in the industry. I also love making new connections with other artists and music supervisors.

If you’re performing at the ECMAs, where is your showcase?

I’m performing as KINLEY on the broadcast of the Awards Show with a band. I am so excited about it! I have some other shows that weekend playing viola with my friend Steve Maloney from Newfoundland.

Well, my performance of “Microphone” will hopefully be intense and moving. I feel so much power from this song and my backing band is made up of some of the best musicians around. I’m hoping to have my badass music video playing behind me as well.

The song that I am most proud of, and that has gotten the most media attention is my song “Microphone.” It has been integral to my healing process dealing with sexual assault, and a lot of people resonate with it. If you’re looking for something lighter, my song “Golden Days” is a dreamy love letter to the beach in PEI. It seems to be popular with children too. Ha!

There are SO many super talented artists on the East Coast. I’m so lucky to get to know a lot of them over the years.

When I was in university at Dalhousie I got amazing advice from my dad’s friend, Doug Riley (aka Dr. Music). He simply told me, “always take the gig.” He was right. I pretty much took every gig I was offered when I started out and that just snowballed into getting more and more shows and recording gigs with a bunch of different artists. Another piece of advice he gave me was “schedule a vacation.” It’s so important to make sure you take some time out to reset mentally and physically.

So many fun projects on the horizon! I’m planning on launching my own at-home business recording violin/viola from my home studio for my own music and other artists. I have been learning the ropes and am excited to work from PEI and take a break from the touring life. I’m also writing more music for KINLEY, and continuing my Sharing the Microphone campaign in new and exciting ways. My music video for “Microphone” is being added to the PEI Grade 9 health curriculum as part of their new module on consent, bystander intervention, gender norms, and sexual violence.  It’s such an important topic and I am SO excited that I can be a small part of the conversation.