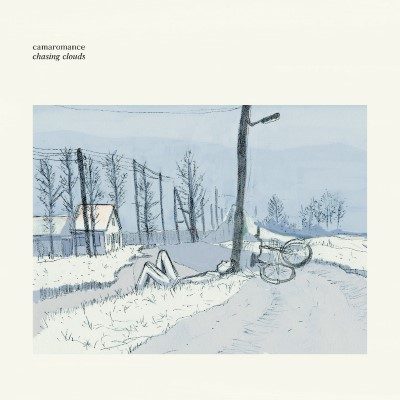 Under the persona of Camaromance, Montreal singer-songwriter Martine Groulx has been a part of the music scene for almost twenty years. After an eight-year hiatus, she is back with her fourth album Chasing Clouds. This is an album that wasn’t planned, yet forged its way into existence at a time when she “found herself mourning a series of losses that catapulted her into a songwriting streak.”

Through Chasing Clouds, Groulx shared grief and the connected events as she bared her soul in what is said to be the most intimate lyrics to date. The album is described as “an exploration of darkness and heartbreak, always looking forward to better days.” Throughout the creative explorations of her songs, Groulx channels themes of love, life, and loss. It has been said that she “compels listeners into an ethereal exploration of darkness and broken hearts illuminated by her crystalline tones.” Ultimately, She “has created a striking mix of Americana and indie-folk, highlighting her candid poetry with lush arrangements of cellos and lap steel guitars.”

Chasing Clouds is described as a narrative that is told through 10 characters, each included in a song title, as Groulx throws open the windows to her soul. The album begins with a short intro, ‘Moon’, composed of otherworldly melodies and sounds to captivate the listener. According to Groulx, Chasing Clouds is a narrative that “is told through 10 characters who give their names to each song title.”

The first track, ‘Marguerite’, entrances the audience with its beautiful, quiet melody as Groulx’s powerful voice sings about our ever-changing lives and how were are all growing older. Following ‘Marguerite’ is ‘Audrey’; a track that begins with playful, yet hopeful melody, as Groulx sings about relatable times that we have all experienced at one time throughout our lives as we search for what happens next.

The interplay between the instruments in the intro of ‘Antoine’ sets the mood for the song. It leaves the listener with a multitude of feelings especially as the tension sneaks up throughout the track through the creative use of piano as it switches from low to high.

“Jo + Gab” follows this track, taking on a darker tone both through the use of the instruments and how Groulx plays with the tone of voice to match the music.

One track that stands out is ‘Jonathan’. Unlike many of the other songs, this track starts with Groulx powerful voice at the forefront, before the soft melody kicks in.

‘Martine’ brings out her French roots, as Groulx croons this track in French. It was definitely a neat touch to the album. The musical arrangement of this piece is another standout. It began with percussion at the forefront; an attention grabber as this approach is different than other songs. The percussions slowly faded into the background as the guitars became more powerful creating a unique, otherworldly sound.

Groulx included ‘Stars’ as an outro to finish off the album with another ambient, otherworldly melody. It gives you the impression as if you are off in dreamland, maybe even floating amongst the stars.

Overall, Chasing Clouds is an album that you don’t want to miss. It’s creative, otherworldly melodies will captivate the listeners as Groulx “handles poetic and sonic possibilities with a grip and grit too often lacking in today’s musical landscape. Living in the moment while reflecting on the past, her honesty and lucidity easily justifies the audacity. Channeling a post-relationship crisis through the music of Camaromance, these songs feel perfectly out of place and right on time.” Definitely take some time to listen. You won’t be disappointed!