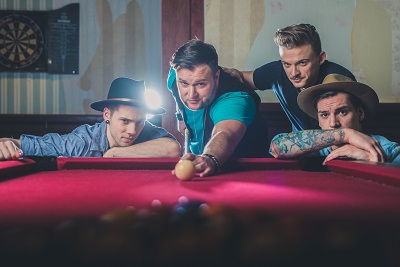 March 30, 2018 is the release date for Chris Buck Band‘s latest single, “Spin On It”. This tune has a fun, up-beat sound that is sure to put a spring in your step and warm your winter weary heart. This is the first single from their up-coming album, All In, due out fall 2018.

2017 saw this west coast Canadian Country band have their most successful year to date with a self-titled debut album, and the Top 20 hit, “That’s When You Know”, a duet featuring Kira Isabella. The song blew up the digital media and music worlds, with more than 2.3 million streams on Spotify and over 80 playlist adds to date, a CCMA nomination for Video of the Year, 6 months of “Top 10 Most Wanted” on SiriusXM, and capped off the year with winning Album of the Year at the British Columbia Country Music Awards, among many other accolades.

We connected with Chris Buck via phone during his radio tour to talk about the new single, an exciting summer tour schedule, his move to Nashville and more.

There is also a new Official Lyric Video release for the single. Check that out here: