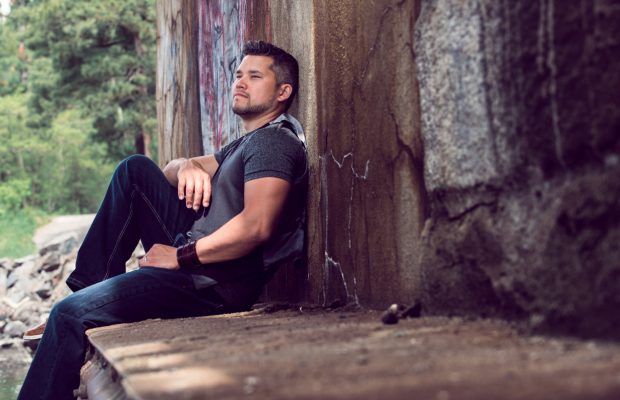 Don Amero is a Winnipeg based musician stepping into the country music genre with brand new material that he considers his strongest yet. An engaging storyteller, singer/songwriter and performer who has been touring, performing and speaking all across Canada for the last 10 years. The three-time JUNO nominee has earned the respect of the Canadian Music industry and has proven himself a much sought after performer who is able to genuinely connect with his audience with an easy and effortless charm.

On April 6th, Amero will be releasing his latest single, “Live While I’m Alive” to all digital retailers. We had the chance to connect with him and ask him some questions about the new single, the up-coming album and more.

Q: Please tell us a bit about yourself.

A: I was born and raised and still live in Winnipeg, Manitoba. I have a beautiful little family (my wife Pam and two kids Oscar (6) and Stella (2)). I’ve been a full-time musician for almost 10 years. It’s been a crazy ride both at home and on the road, but I wouldn’t trade this life for any other.

Q: On April 6th, your latest single, “Live While I’m Alive”, will be released to all digital retailers. Please tell us about the song and your inspiration for writing it?

A: It actually stems back to 10 years ago as I took the leap into music as a career. I was working a hardwood-flooring job at the time and my boss walked onto the job site one day, looked at me and said, “You look awful” and I told him I had bigger dreams than this job and he asked, “What do you want to do?” I said music and touring. What he said next lit a fire in me that is still burning bright today, “What are you waiting for?!”. That was it. I quit that job almost on the spot and headed out on the road with nothing but passion and the audacity to believe I could succeed. This song is my hope to get that message out to people, “What are you waiting for, your life is right now”.

Q: Your 6th album is due for release soon. What can you tell us about it?

A: It is an exciting time. My last album Refined was released in 2015. It was honoured with 2 JUNO nominations. It was produced by Murray Pulver, and it was head and shoulders above anything I’d done to date. I wasn’t sure if I could top that one, but with the help of Murray again, and Saskatchewan producer Bart McKay, this one is setting the bar to new heights. It’s a country, soulful, pop album. I love it and cannot wait to share it with everyone. For the first time in my career, I have recorded songs from other writers (5 of 9 of the songs are not my writes). What I came to learn with this album is that there are some amazing songs out there and I have the privilege of being the vessel that delivers those songs to the world. That’s a pretty great honour.

Q: You have had a very successful music career over the past 10 years. What, to date, has been your highlight and why?

A: The 2016 JUNO nomination alongside Jann Arden, Johnny Reid, Diana Krall and The Tenors is pretty high up there. Also having a few songs played with the Winnipeg Symphony Orchestra is a tough one to top. I know this will sound pretentious, but honestly the best moments for me (and always chokes me up) is when someone pulls me aside or writes me a message to say how a song has affected them in a positive way. That’s the stuff that really matters to me.

Q: You do a lot to give back, especially to your Indigenous roots, what has been the most rewarding experience for you?

A: I grew up in a culture-less home. That’s no fault to my parents, they too were brought up without much knowledge of their true history. As my music career has grown, so has my connection to the Indigenous community in North America. I have felt accepted as a brother, cousin, friend and mentor in the Indigenous community despite my lack of traditional learning and full understanding of the Indigenous experience. My hope is always that I can be a light to all but especially to Indigenous youth in Canada who have felt forgotten and not cared for. The rewards come when I see a young person’s face light up and they feel that.

Q: What Canadian acts are you currently listening to and what is it about their music that captivates you?

A: One of my favourite acts in Canada happens to be from right here in Winnipeg. The Bros. Landreth released their debut album ‘Let It Lie’ back in 2013 and blew so many of us away. It became the soundtrack of my life for a good while, and it’s still on pretty heavy rotation in my car and office. I think the magic was in how it had so much space sonically and every player in that band was at the top of their game. It was a labour of love and that comes through every time I hear it.

Q: One of my favourite songs of yours is “Broken Hearts”, a duet with Crystal Shawanda. Who are some other artists you have sung with? Who else would you like to sing a duet with?

A: Crystal was the perfect choice for that song. I’m so glad she sang that with me. She’s got a fire to her voice that is unmatched in my opinion. As for duets, I’ve not recorded anything else at this point, but my wish list includes Jim Cuddy, Jann Arden, Seal and Ed Sheeran. Can you imagine a song with all of them! A boy can dream.

Q: Is there anything you would like to say to your fans?

A: As we all know, it takes a village to raise a musician, and my village has been my friends, family, fans and business team. I’ve been blessed to have a full-time music career for over 10 years and it’s been a lot of work, but I haven’t carried the workload alone. I owe this success to all those that have been in my corner, coming to concerts, buying my music, booking me for shows and encouraging me when the road got tough. My hope is that as I’ve grown and succeeded in this career; that they can feel pride in knowing that they have been part of the story.