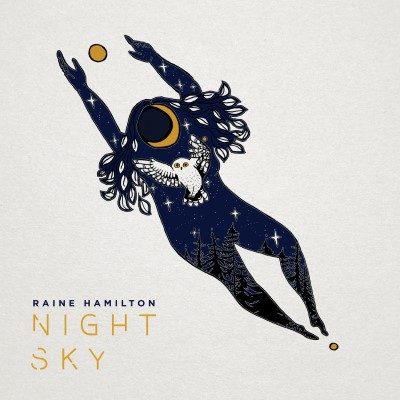 Night Sky is the sophomore album from singer-songwriter/violinist Raine Hamilton. The Winnipeg artist recorded the 10-track album with producer Lloyd Peterson at Paintbox Recording in their hometown.

Raine’s first experience with a violin began at age seven, and she has been playing music ever since. Her music has taken her from coast to coast; performances with the Winnipeg Symphony Orchestra, festivals across Canada, and unique venues like her 2017 Cave Concert in Canmore, Alberta.  Her songwriting workshops and work with the American Sign Language Interpretation have earned her a place as an educator within the Canadian music world.

Opening track “Starlight” comes in strong with a heavy violin melody, while “Lift Me Up” feels lighter both musically and lyrically with lines like “Follow the dark. Lift your spirit up.” The chamber band behind “To The North” may be one of the most relaxing melodies you’ll hear from a singer-songwriter. Raine’s classical background carries throughout the entire album – songs like “Aurora in the Meadow”  exude a vulnerability in its reflectiveness. An interlude of sorts is found in “Everyday” which does not feature any of her vocals. Without certainty, “For Hildegard (Canon in B Phrygian)” sounds like a gorgeous fable from the past.

One of my personal favourites comes from “La Plaine” simply for its soulful aura – the silkiness of Raine’s vocals and the gorgeous French that she flaunts. As we come to the final songs we find “Broken Plate”, melancholy with lyrics that will stick with you- “My heart is not your harvest”, just one of the standouts. The album ends with the guitar-only ballad “Bury My Heart” – a gentle end to a singer-songwriter’s impressively crafted sophomore album.

Raine Hamilton’s storytelling is almost ethereal in its energy and tone. Her vocals never waver, and each song carries its own power. The way she blends her classical background with the folksy storytelling is so pleasant to hear. If you liked it as much as I did, she has a lot of Canadian tour dates this spring. Check out her website for more info.