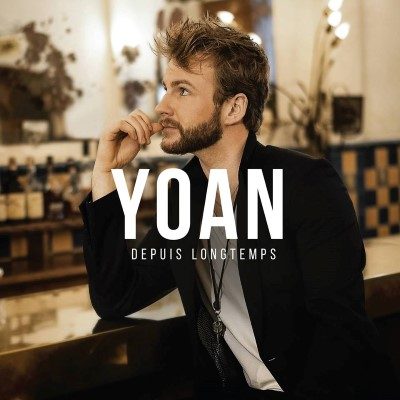 Fans have been patiently waiting and hiding their excitement for the release of the newest album from Yoan. Available now in physical and digital formats, Depuis longtemps is the sophomore follow up to Yoan’s self-titled, platinum-selling debut album. Yoan instantly won over the hearts of his fans with his rich voice and humble personality when earned the title spot on Season Two of La Voix (The Voice). With the release of his debut album, Yoan made a giant splash in country music as his album sales skyrocketed and tour dates sold out. After touring extensively while promoting the album, Yoan took some time to work on his new material and the result is the release of Depuis longtemps.

Last night (March 22, 2018) Yoan gave his fans, friends, family, and specially invited guests a preview of the album at le National theatre in Montréal, QC. Yoan played to the excited crowd and gave them their first taste of the new music and sold advanced copies. Telling stories of songwriting, and how some of the songs came to be, Yoan interacted with the audience and then stayed to meet all of his fans well into the evening.

Writing exclusively in French, Yoan personally wrote ten of the twelve tracks on the Depuis longtemps, including the album’s title track. Paying tribute to one of his influences, Yoan included a cover of Michel Pagliaro’s “Sous peine d’amour.” Yoan’s father and fellow Quebec country artist Sylvain Garneau wrote the lyrics to the song “Je t’aime évidemment” and set them to the tune of Travis Tritt and Lari White’s 1997 hit “Helping Me Get Over You.”

The album opens with the upbeat track “Tu m’aimeras.” Yoan easily pours out his heart and soul on his ballads. He performs with ease and comfort. “Reviens-moi” and “Novembre” showcase that signature style. Yoan kicks things back up with his tracks “La blonde” and “Rock’n’roll.” Showing his influences from the retro sounds of outlaw style country to the southern and Texas sounding arrangements, you can hear many different musical elements and inspiration throughout the album. The album is not only a showcase of Yoan’s great voice but his artistic abilities as a musician too. Yoan’s arrangements are creative and display his true love for country music.

Yoan took the time to create this album exactly the way he wanted. You can hear throughout the album that the music comes naturally to him. Taking his own creative control, Yoan recorded the album on his own label Yoan Inc. Yoan collaborated with his longtime friend and musician Rick Haworth on the album arrangements. With his second album now released, 2018 will be nothing short of a busy year for Yoan. With a full tour commencing in September, Yoan will spend his summer playing live and preparing for the tour that will presently take him into May 2019. Yoan will be available starting March 24, 2018, for a series of album signings throughout various locations in Quebec. You can check out his Facebook page for official dates and locations.