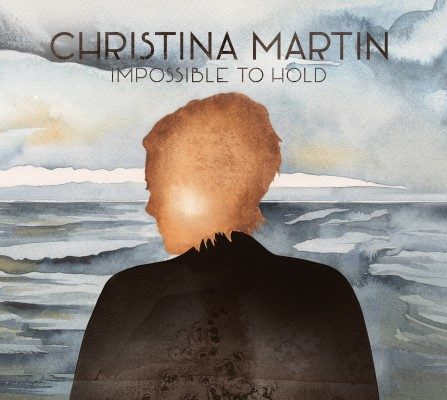 Martin is one of those rare artists who can showcase her talents across a number of different genres. As comfortable singing a synth-led pop song as performing her Americana led heartfelt acoustic compositions. She is also not shy to confront personal experiences in her song-writing full on, and it is this intensity and integrity that makes her art so endearing to so many. Along with long-time partner and ECMA Award winner Dale Murray, they weave a beautiful musical yarn that is all held together with Martin’s delicate vocals and Murray’s subtle, distinctive and complementary guitar style.

Raised on the Canadian East Coast, Martin began writing and recording her own music after a move to Austin, Texas in the summer of 1999. Her obvious influences are used to creative effect without a hint of imitation, which is never an easy feat to pull off.

First off the rank is the beautiful and heavyhearted album title track “Impossible to hold” that builds against a James Honeyman Scott/Pretenders style chiming guitar bed. “We never touch, impossible to hold, I don’t miss much” as it leads up to the key change. It’s a splendid album opener.

Next up is the lead single “Always Reminding” with its eighties inspired synth/drum machine combo builds slowly is the perfect testament to her versatility, and the understated guitar backdrop is truly sublime. A beautifully crafted lyrical composition that is so well balanced it could stand on a Toonie.

The album is the follow-up to 2016’s It’ll Be Alright, which earned Martin the East Coast Music Award for Pop Recording of the Year. Impossible To Hold still features her distinctive story-telling style but is awash with a wider musical palette than in previous releases. Prior to the album launch, Martin commented “There was little concern for following any style or trend in writing and recording these new songs. My commitment was to honour the direction the songs were leading me in. There were dark moments in the process, but I showed up each day to work, and hoped it would all come together.” It certainly did.

The album mixes soft and dark pieces like “Deep Dark Red”, and “Keep Me Calm” highlighting her insecurities against bittersweet atmospheric pieces. “Winter” has a haunting, almost faith-like calmness, and a guitar solo that Chris Isaak would have been proud of.

These changes of style and pace hold together surprisingly well interspersed with the more up-tempo, edgier raw tracks; Martin’s haunting vocals holding everything together.

Highlighting the miscellany, “Foreign” mixes Martin’s soft vocals against a guitar fuzz melody that shreds and chugs along like a runaway train.

Provocative single, “Lungs Are Burning” follows, written in response to the rising Fentanyl drug crisis in Canada and her own personal loss related to addiction and mental illness, and ‘Where The Dark Meets The Light’ drawing inspiration from “the challenges and triumphs of dedicating your life to the artistic journey.”

Canadian Beats personal favorite is “Noise and Toys”. A stripped back, overdriven guitar with warm vocals and builds with contemplative lyrics to accompany… “Would it kill you to let go?” Martin questions.

Closing track “Lay You Down” completes an almost spiritual experience.

Martin’s compositions have featured in film and TV and she continues to perform at some of the world’s top music festivals across the US, Europe, and Canada and is currently touring central Europe as the album is released. Be sure to check out their memorable performances, both as an electric band and her acoustic sets; both are absorbing and arresting in equal measure.