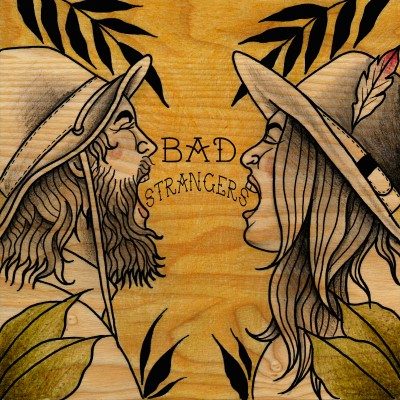 Vancouver folk duo Bad Strangers have released their self-titled debut album. Bad Strangers is an emotive collection with beautifully vulnerable song-writing that romanticizes the ideals of love but shows the inner conflicts that oftentimes go hand-in-hand with its pursuit.

Bad Strangers opens with “Sleepwalking”, a track that introduces us to Cassidy and Corey’s impeccable ability to harmonize beautifully while individually maintaining their powerful and poignant vocal styles. Their voices play off one another in a very unique and controlled way, showcasing a level of mastery in their craft.

“Beautiful Shame” has lyrics relatable to all who have ever known better but persisted nonetheless. In its sound, you can hear passion and strife both conflicting, but neither winning. It is in tracks such as these that we hear the undeniable chemistry between the two which leads us to believe, that this collection is their own personal history.

The album closes with “Crumble”, one of the more romantic tracks off of the album. This is a song is about love lost but expresses the message in a way that is hopeful and romantic. It ends the album giving you a feeling that to love, even if painfully so, is an experience worth having.

As a whole, this is a promising debut for Bad Strangers. The playful way the duo harmonizes and then switch between lead vocalists make for a compelling and unique sound.  Their song-writing was consistent and flowed well, telling us a cohesive story that promotes independence, self-discovery and the beauties and trials of romantic love. Their raw talent is clear and I look very forward to seeing how their sound evolves from here.

Hello, my name is Sarah Armiento and I dabble in many different areas of the Montreal music world (AND beyond). By day I am a music publicist, band manager and aspiring bass-player-for-80s-covers-only and by night I do booking and promotion for an underground venue in my neighbourhood. I also never stop trying to be cool on Twitter.