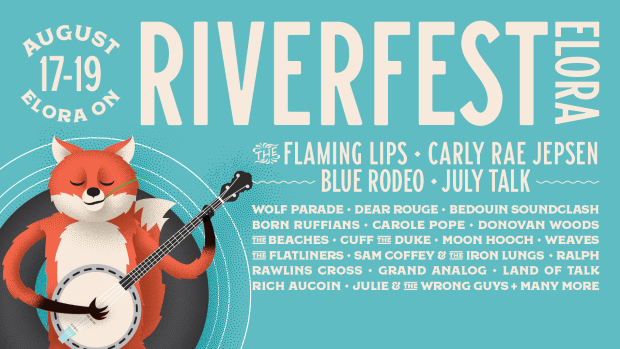 Ontario’s “big-little” festival has become one of Canada’s premier boutique festivals over the last 10 years, offering top-tier headliners, up-and-coming indie bands, artisans, food trucks and craft brews, all within a majestically natural setting along the banks of the famed Grand River in Elora — Ontario’s most beautiful village.

Now heading into the 10th annual installment, Riverfest Elora, which started as a backyard festival in 2009 with an attendance of around 700 people, has grown exponentially in recent years to see crowds of over 5,000 a day over the August weekend.

Growing from the success of past instalments, which included performances by MGMT, Arkells, Metric, Chromeo, The Sheepdogs, Serena Ryder, Gogol Bordello, Sharon Jones & The Dap-Kings, Walk Off The Earth, Mother Mother, Charles Bradley, Donovan Woods, Bahamas and many more, Riverfest Elora is enjoying the continued support it has been getting through its ongoing community and artistic partnerships and the unwavering support of Elora’s small but mighty community.

RIVERFEST JOINS THE KEYCHANGE PLEDGE! Keychange is a pioneering European initiative which is empowering women to transform the future of the music industry and encouraging festivals to achieve a 50:50 gender balance by 2022. Keychange aims to accelerate change and create a better, more inclusive music industry for present and future generations.

Keychange is led by PRS foundation, supported by the Creative Europe programme of the European Union, in partnership with Musikcentrum Ost, Reeperbahn Festival, Iceland Airwaves, BIME, Tallinn Music Week, The Great Escape and Mutek. Find out more at www.keychange.eu

To help Riverfest Elora celebrate our 10th annual festival, we are pleased to partner with The McGinn Brothers Big Game in support of Big Brothers Big Sisters Centre Wellington! The Big Game is a charity ball hockey tournament, taking place in Fergus on August 17, 2018. Kids from different age categories will vie for spots in the final game to play alongside some of their NHL hockey heroes. A great family event at no cost, fans will have a chance to bid on auction items, get pieces autographed, listen to live music and watch some entertaining ball hockey. Proceeds from this event will be donated to Big Brothers Big Sisters of Centre Wellington for their capital campaign to create a hub of services that will support youth in their mental, physical and emotional health.100% PACKAGED WATER FREE! Thanks to Riverfest Elora’s partnership with Wellington Water Watchers, The Township of Centre Wellington and Quench Buggy, Riverfest Elora will be 100% packaged water free for the fourth year in a row! This year will also see the festival cut out the use of plastic straws.

For tickets and additional info: www.riverfestelora.com