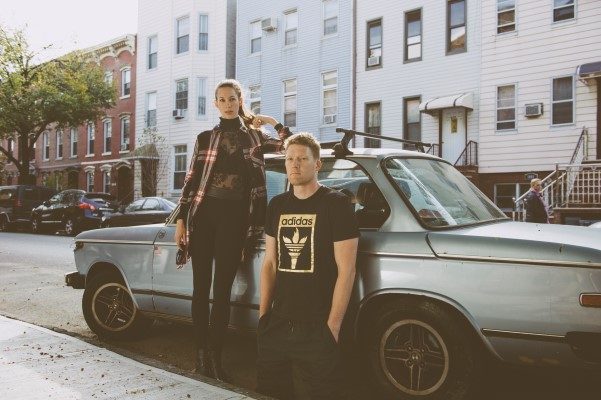 Canadian born, Brooklyn, NY-based singer-songwriters, Anna Paddock and Patrick Anderson make up the duo, The Lay Awakes. We had a chance to chat with them in advance of the release of the video for their single, “Falling In Love”, which is off of their upcoming album, Home Away From Home. The album is set to be released on May 4. Check out the video below, and find out more about these two remarkable artists.

Hi Patrick and Anna, please tell our readers a bit about The Lay Awakes?

Patrick: We’re married, we both write and sing songs, Anna on piano, I mostly play guitar.  We met through playing music at a friend’s wedding, but besides the odd singalong or wedding gig, we didn’t really think about making music together until a couple years into our marriage, after the glue had set a little bit…and after listening to David Gray’s Mutineers together probably a hundred times.

You both have athletic backgrounds. Could you please tell us about this side of your lives?

Patrick: Anna grew up around sports. Her dad played and coached in the NHL and her uncle played volleyball in the Olympics.  Anna herself played volleyball at Trinity Western University. I’ve played wheelchair basketball for 28 years, ever since losing my legs in a car accident, and I’ve won a few Paralympic medals with Canada.  Sports has shaped both of us.  Without taking it all too seriously, it’s an underlying assumption in our relationship that sports matter, to some degree, on some level. We’re also alike in that neither of us is a cutthroat competitor, but probably more drawn in by the discipline and craft of being an athlete.  Which is just a stone’s throw from music.

You released your first EP together in 2015, and now you are set to release your full-length Home Away From Home on May 4, 2018. How has your sound changed since your EP release?

Patrick: It hasn’t changed a lot.  The new cd is fuller and there’s an up-tempo song or two.  Our fingerprints are on it a little more, since this time around we understood more than nothing about recording.  We worked again with our friend Jeremy McDonald, whose production skills and experience had grown working at Mason Jar Music.  He let us bring different types of songs to the table, and made them fit together somehow.

What is it like writing, rehearsing and performing with your significant other?

Anna: Every day is different, but I think the best part is knowing that we have each other’s backs.

Where do you pull inspiration from when writing?

Anna: Oftentimes, a song I write will begin with a small, biographical fragment.  It could be something I saw on the street or a more personal interaction and relationship.  When I’m writing in this way, I let my gut guide me, and that usually gets me 1/10 of the way…  After that, it’s elbow grease.  Honing, crafting, finishing the story, massaging and starting over if necessary.  When I’m biographically stumped, I like to write from the perspective of others and/or I will try and write as fast as possible.

What can you tell me about the writing process for the album?

Anna: Hmm…it seems like this album was more a process of unveiling or maybe winnowing.  A lot of the writing was done years ago, and some of it more recently, but the collaboration came more with editing and song selection and how best to approach and record the songs to express where we are now…musically, expressively, and otherwise.

Tell us a little about the song “Falling In Love”.

Patrick: Anna and I had been dating for a couple months, and I had this hunch, but what did I know?  I’d never been in love before.  It felt right though.  By far the fastest I’ve ever written a song.  I just wrote it down. I did have to change a couple jazzy chords before Jeremy would agree to record it.  He knew that Michael Buble was not walking through that door.

You just released a video for “Falling In Love”. What was the highlight of the video shoot?

Anna: Definitely the dreamy, rainy, romantic weather — and the car we were able to borrow at the eleventh hour!

What’s up next for The Lay Awakes?

Patrick: We have a Brooklyn show on April 6th with our friends The Welcome Wagon, and very likely a Toronto show in early May when the album comes out.  We plan to play out more in the fall after a busy basketball summer wraps up (with a gold medal at Worlds 😉