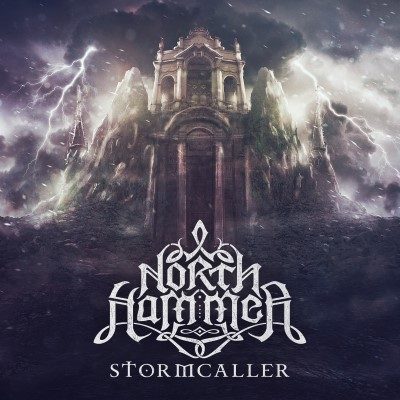 North Hammer released their debut album Stormcaller on March 16. The entire album is written by Andrew James, who hails from the Edmonton, AB music scene; including Eye of Horus and Shotgunner. The new project is a one-man folk fusion with Viking metal.

Andrew had written and recorded guitar, bass, vocals, and orchestration. If your a fan of Amon Amarth, Ensiferum, and Wintersun this album is one you won’t want to miss. Though currently, the band is a one-man run project, Andrew is working on finding top-notch and like-minded musicians to tour Western Canada.

The first single “Avatar” welcomes a lot of Viking metal influences, including a few extra technical guitar styles and heavier drum beats. Similar to the bands name the lyrical styles of the song focus on Northern weather including “icy winds”, “columns of ice” and “deep snow grapples my ankles”.

Andrew quotes, “The hard-charging melodic death metal of this song is itself heroic in its atmosphere, its darting, folk-influenced riffs, galloping rhythms, fiery soloing, and soaring keyboard melodies summoning mythic images of striving and triumph. While its musical antecedents are indeed clearly identifiable, it’s nonetheless a pulse-pounding, heart-swelling track, and one that proves to be very catchy as well.” and that “Avatar is a manifestation of a deity or released soul in bodily form on Earth; an incarnate divine teacher. This is the definition that I thought fit well for this song. This song is about battling the elements of scaling a giant mountain during blizzards and furious winds. The teacher and deity aspect of the hero shines through as he preserves and inspires other beyond their capacity.”

Similar to “Avatar” opening the album. “Lions Winter” focuses on Norse-mythology but brings a darker aspect of a bloody battlefield. Having this particular track at the end of the album almost brings an expected finish. With ending lyrics “Many men lie dead, One with the soil, Valkyries carry their souls to the god in the sky” closing the album just as hard as it started.

Though the album itself can be viewed as a concept album, each track stands out individually and brings a new twist to Viking-metal with a North (Canadian) feel to the heavier metal genre. If you like Amon Amarth, Ensiferum, and Wintersun you won’t be disappointed in this album.