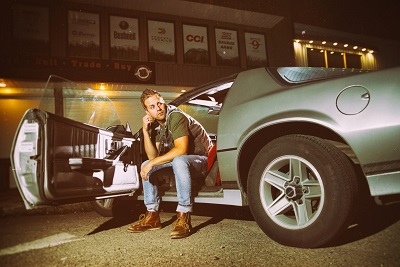 Dan Davidson is a Canadian singer and songwriter who has been pursuing his solo Country music career since 2014. He is one of several Canadian artists who has switched genres and “Found” success in the Country market. Previously, Davidson was with the Rock group Tupelo Honey as their guitarist and lead vocalist.

Davidson’s first charting single “Found”, released in 2016, has earned him many accolades and awards including winning several Association of Country Music in Alberta (ACMA) Awards and being nominated in categories for Canadian Radio Music Awards (CMRA), Western Canadian Music Awards (WCMA) and Canadian Country Music Association (CCMA) Awards. He has become an artist to watch.

On February 9, 2018, Davidson’s latest single “Let’s Go There” was released to radio and a month later, on March 9, 2018, the video was released. This video is a look at Davidson and his band on tour with Brett Kissel‘s We Were That Song Tour. The video shows some great highlights on being on stage, interacting with fans and more. Well worth a watch or two.

In our interview, Davidson discusses being on the road, juggling family life and more.

Here’s the video for “Let’s Go There”: