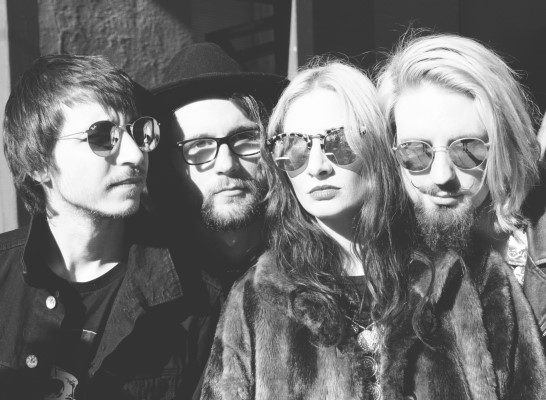 Winnipeg’s own Solhounds just released their debut pair tracks, “Side A: Body Bandit” & “Side B: A Man (I Taught Him)”. The songs speak to the current feminist movement, driving the message of empowerment and equality. Listen to the tracks below.

This release is only the beginning for Solhounds, who plan to release a full-length album in 2019, and there have also been rumours of a 5thh member reveal, so stay tuned.

The band is heading on an Eastern Canada tour with SATE, check out dates below, as this is a show you will not want to miss.

Care to introduce yourself to our readers?
I’m Elise, the lead vocalist, and lyricist of Solhounds. We are a five-piece band from Winnipeg, the coldest but coolest little city in Canada.

Tell us a bit about your music and writing style.
We call ourselves “heavy metal grunge” because it lies somewhere between the two – almost falls into stoner rock or desert rock but with a little more crunch. Our writing style is entirely collaborative and we all have different influences from Clutch to Fishbone to Radiohead to The Dead Weather and many more. No one really comes to the band saying “I’ve got this song and here’s how to play it” it’s like, “I’ve got this idea, how can you add to it?” Listening to each other and being open to trying new things has really enabled us to hone in on one, collective sound that we feel, at least, is pretty unique. It’s cool because while we fit well on a regular rock bill, we’re also hard enough that we’re seeing some love from the metal scene as well.

Do you have any upcoming shows? For someone who has yet to see you live, how would you explain your live performance?
Yes! We have several upcoming shows:

Our live performance is fierce and action-packed: it’ll make you drop your phone, dig into the old, angsty feelings you thought you left behind, raise your devil horns, and headbang at all things corporate, and unjust.

If you were asked to suggest only one of your songs for someone to hear, which would it be?
I Taught Him (Be A Man) – because everybody needs a feisty break-up song to scream along to

Canadian Beats is all about Canadian music, so who are your current favourite Canadian bands/ artists?
YES! We have so much talent here. Ok…

Propoghandi, SATE (who we get to tour with!), The Beaches, The Pack AD, Metz, We Hunt Buffalo, Death From Above, Mise en Scene, Alexisonfire, Ken Mode, Comeback Kid… to name a few.