Montebello Rockfest goes back to its roots with their 13th edition

After a series of teasers, the Montebello Rockfest team thrilled music fans Wednesday when they revealed their loaded lineup for 2018.

Right off the top, we have to focus in on supergroup Prophets of Rage, (Tom Morello, Brad Wilk & Tim Commerford from Rage Against the machine, B-Real from Cypress Hill and Chuck D from Public Enemy.) With a set that is going to include hits from Rage Against the Machine, Cypress Hill, Public Enemy and a tribute to Chris Cornell their performance will definitely be the highlight of the weekend.

Previously announced bands including the likes of Sum 41, Motionless In White, Flogging Molly, Lamb of God and others will be joined by newly announced acts Weezer, Five Finger Death Punch, Jimmy Eat World, Henry Rollins and so many more.

Montebello Rockfest takes place from June 14 – 16 with tickets on sale now and if history stays true it is sure to sell out. 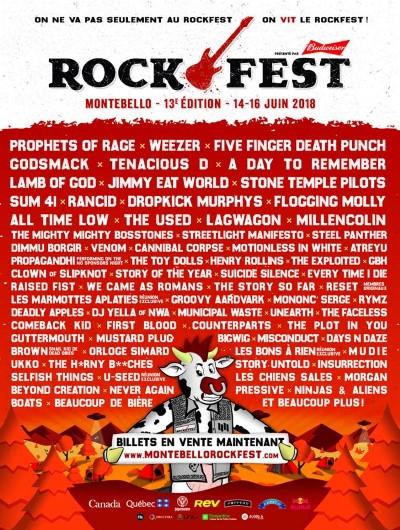