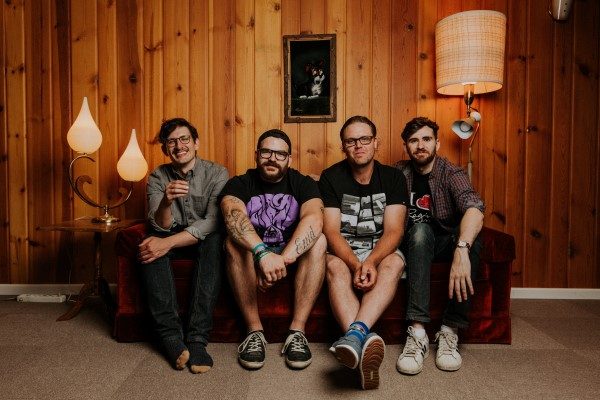 Regina, SK-based band, Nick Faye & The Deputies have released a live-off-the-floor version of “Whispers” from their upcoming album, Stumbling Distance which is set for release in April 2018.

When asked about the video, they responded,

“The video was done in our jam space which is called “The Lamp Lounge”, we were just trying to capture the live feel of one of our jams”

Watch the video below, and find out more about Nick Faye & The Deputies in our newest Five Questions With segment.

Totally. My name is Nick Faye. I play in a band called Nick Faye & The Deputies, and we’re from Regina, SK.

Our music has definitely evolved over the past few years. I started writing acoustic folk-pop songs out of my basement in high school and in my dorm room in Saskatoon. I kept going to amazing local shows in Regina and Saskatoon and being inspired by all the amazing Saskatchewan artists such as Andy Shauf, Zachary Lucky, Sylvie, Rah Rah, Volcanoless in Canada, etc and really wanted to be a part of the scene, and I kept pushing myself to write better songs and play more shows around the Prairies and tour Canada.

About 7 years ago, I asked our bassist Byron if he would record some new songs that were more rock focused. He wound up joining the Deputies alongside Adam (our drummer), and eventually Jon (keys) and we just kind of grew into a more indie rock-pop sound with folk-country flourishes that you hear today.

“Stumbling Distance” is actually a concept album that details a youthful summer romance in the summer following graduation in a small town on the Canadian Prairies. It explores the dynamic between “those who stay” to work and live in the rural communities that they grew up in and “those who leave” to seek out new career and education opportunities in bigger cities. We’ve never done a concept album before, but it was really cool to work with Juno/Polaris winning producer Michael Wojewoda to flush out the concept and really explore some cool new soundscapes that eventually made it onto the album!

We’ve got a bunch of shows lined up! We’re pumped to play some Western tour dates in AB/SK, and we’ll be announcing some Eastern dates in a little bit as well! (See below for tour dates).

Our live performance is definitely a fun time. It’s mostly us rippin’ our songs and having a really good time chatting with the audience. Our stage banter is one of our most unique characteristics. A lot of people come up to us after shows and tell us that we should do stand-up comedy, but it’s honestly just us acting like goofballs onstage. I hope people watching us have as much fun as we do when we play because it’s such a privilege every time we get to take the stage!

Oh man, I don’t think I can suggest just one off the new album! “Told You” and “Whisper” are great, but my favorite is probably “Ex Pats”. There are some swears, but it’s an angry punk song about people who move away from small town SK and think they’re better than the people they left behind.

I think there is an amazing wave of strong, exceptional music being put out by Canadian women these days. It’s ridiculous how much talent there is in the country. Skye Wallace, Megan Nash, Hello Delaware are all amazing. Land of Talk probably put out the best album of the last year.

Locally, Surf Dads and Poor Nameless Boy are some other wicked SK bands too!