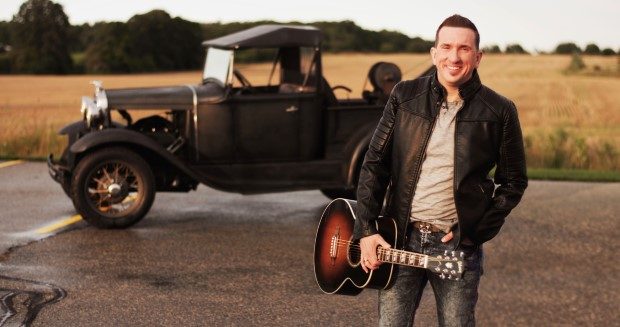 Ontario country music veteran, Scotty Kipfer will be releasing his first full-length solo album, Taking My Time in June 2018, although he’s spent the better part of the past decade support others with his songwriting and performing skills. Kipfer debuted his first single, “Falling Like The Rain” yesterday, accompanied by a music video. The single is “a semi-autobiographical song about a reserved country boy who lands a date with a free-spirited girl.

“Stepping outside your comfort zone can be a little awkward,” Scotty says, “but when you give yourself over to it, that’s when the magic happens.”

Take a few moments to check out the single below and find out more about Scotty in our Five Questions With segment.

Hi everybody, I’m Scotty Kipfer! You might not know who I am yet, but I’ve been around the country music industry for quite a while working behind the scenes in record labels and management. I’ve toured playing guitar with my buddy Bobby Wills, I promoted records for a bunch of other amazing Canadian country artists, and I just spent the last three years writing and recording the first album of my own – it’s called Taking My Time, and it’s coming out on June 15 (you can preorder it on iTunes now if you like!).

My influences are probably very different from most artists on the scene today – I never really got into rock music. I was about 30 when I heard Freebird for the first time, and I didn’t really see what all the fuss was about. I guess it just wasn’t my thing. I was always into country music, and the rich history and culture surrounding it. I love the old syndicated shows like Hee Haw and The Grand Ole Opry. The best artists of the time were all involved, and the humour was so smart, I just couldn’t get enough. I also grew up surrounded by brass band and fiddle music, and I was addicted to Disney movies and Looney Tunes cartoons and their soundtracks. I think it was only natural that I eventually became drawn to musical arrangements that relied on strong melodies and chord structures to tell their stories. I use all of those influences in my writing today.

My writing style varies from the whimsical to the wistful. I love telling stories, and I think that would be the common thread through all of my songs. On this record I have a couple fun songs about new love, I have a much deeper song about a guy who unintentionally shoots a man while robbing a bank (that’s all I’m going to tell you until you hear it for yourself!), and I have a little bit of everything in between. Real country music is a broad spectrum, and I tried to put 11 of those shades on my record.

Since I left the business side of music, I’ve been a full time working musician so I’m playing all the time – you can check my website for a list of dates. There are always more being added. Right now, I play a lot of restaurants, taprooms, and private parties. I love taking requests so It’s pretty interactive, but I keep it country.

That’s an easy one right now because only one song is available until the record comes out in June. Falling Like The Rain has been a special song for me right from the moment I started writing it with my buddy Ryan Sorestad (another Canadian dude who’s doing great things in Nashville). We wanted to capture a moment on a first date between a shy guy and a free-spirited girl. Storm clouds roll in, the rain comes, and he wants to run for shelter but she convinces him to stay a while. They dance in the rain, and he falls for her as the water washes away his inhibition. Stepping outside your comfort zone can be a little awkward but, that’s when the magic happens.

There’s so much great Canadian music out there right now. I love that Dallas Smith has become such a massive force in country music in Canada. Sleeping Around was killer. I’ve been a huge fan of Bobby Wills since before he broke out with “Show Some Respect” in 2012, I love the James Barker Band, Jojo Mason. There’s a fabulous artist named Tenille Townes that I’ve written a bunch with that I think is fantastic. She’s about to go out and tour with Miranda Lambert and Little Big Town. You’re gonna love her!