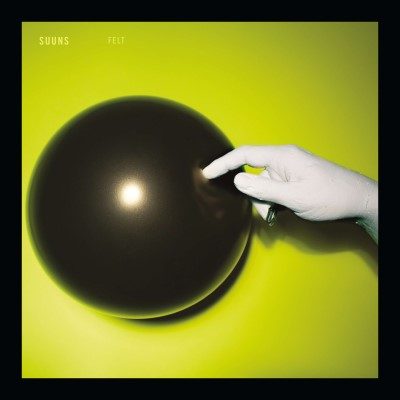 Returning with their third full-length record and first since 2016’s Hold/Still and the subsequent remixed sequel Hold/Still Remixes (2017), Montreal based indie rock band SUUNS have released Felt, an extremely experimental record that you’ll either get, or you won’t.

Felt opens to the catchy and slinky guitar of “Look No Further” and the distorted sound of a snare drum.  It is the closest thing to a riff on the record, and probably the strongest and most predictable structure across the record’s eleven tracks.  The rest of the songs continue to paint an array of textures and sonic frequencies that, well, I’m not all that sure what to think of.  At times the vocals feel like anti-singing, and the album is devoid of anything remotely close to a record. Sections in “After The Fall” and “X-Alt” feel abrupt and random for not the sake of developing the song, but the sake of creating random sounds (that being said, the sax solo in “X-Alt” is performed flawlessly).  “Make It Real” with its bouncy keyboards and steady pulse from the drums is the closest SUUNS get to straightforward indie rock, and it is a direction they should pursue.

While listening to the rest of Felt, I wonder if there is an underlying meaning behind the band’s obscure songwriting and choices regarding style, transitions, textures, and structure, however, if Felt is not a record of experimentation purely for the sake of experimentation, then it feels pretentious.  This is not a commercial record in any way, and while there is certainly nothing wrong with that – some of the greatest sonic pieces of art were not projects that were commercially viable- the level of experimentation on Felt takes away from the enjoyment of the record and feels as if songwriting and strong recording performances are being sacrificed.