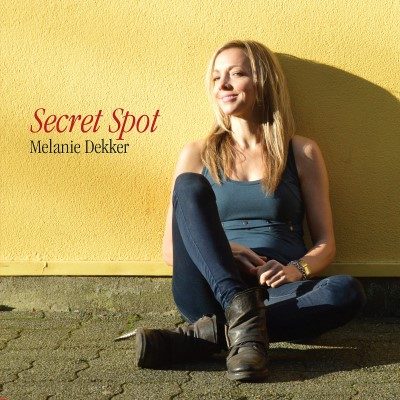 Melanie Dekker has been making hit country-pop for over a decade; releasing six albums, opening for some of the biggest musicians in modern music like Faith Hill and Diana Krall, and playing for fans across North America and all over Europe- her songwriting has earned her the Canadian Medal of Honour for her song Fall In/Wounded Soldier. Now the BC-native has released her newly anticipated record Secret Spot.

There’s a tone in her voice, especially in the opening track and standout “Memories of You” that feels like you’re listening to an old school Sheryl Crow record; she croons over her broken heart with lyrics like “I just can’t fight with the memories of you.”

“Front Row” a beautiful folksy story that is so relatable in its lyrics. How many times have we dreamed of the adventures we wish we could take? It instantly invites you to sing along. Slowing things down with “More Human”, we get to see a more somber, vulnerable side. Her voice is stripped down, and she has the most delicate melody behind her- exuding a romance among the sadness.

The sadness doesn’t last for long as she jumps back to her signature folk strumming on “Ginned Up”; a cheeky sing-along. “Try Me (The Basket Song)” is another story so well written. Relaying memories of lessons learned, “Always Gonna Be” is an honest look at life and the determination Melanie never lets go of in her own life, through the wise words of her mother. The personal stories continue with tales of her father and the beautiful way in which he found his voice through the song “Te Amo Mucho.”

The album’s title track “Secret Spot” is another lyrical adventure that takes you through the woods until you reach a beautiful beach and the stars; given she’s from British Columbia, this too feels very autobiographical.  One of the standouts has to be “Better When We Do” – departing only temporarily from the classic folk in favour of a lovely jazz spin. And we end with the appropriately titled “When It’s Over”; a somber end to an overall cheery album- but it never loses its authenticity.

Melanie has been doing this long enough that she knows what her sound is, and she knows how she wants to present herself as a musician. She tells her stories with such ease- no frills or fuss. Like the great singer-songwriters, she professes to be influenced by – Ed Sheeran, John Mayer, Tom Petty to name a few- taking her fans through a storybook of personal experiences both exciting and heartbreaking.  Females folk/country artists aren’t talked about enough in music. We’re lucky to have songwriters like Melanie Dekker.