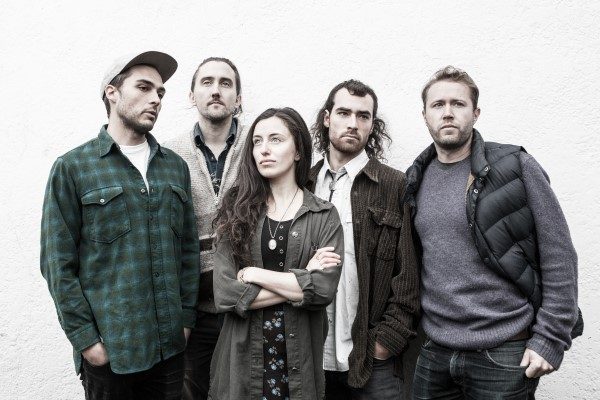 BC band, Carmanah recently released their debut album, Speak in Rhythms. The band took off on a cross Canada tour in celebration of the release throughout January, February & March, which will see them performing in Toronto on March 14 at The Rivoli. The band also released a single, “Roots” with a music video, which you can check out below, along with the rest of the upcoming tour dates.

The five members that make up Carmanah are Pat, Marek, Mikey, Nick and me, Laura Mina. We are usually accompanied by our dog, Spud, whose shape does, in fact, resemble that of a potato. We call him our sixth and most distinguished band member. We run our tour truck on used vegetable oil, gathered from local restaurants. Because of this, when we drive away, our truck leaves a slight aroma of french fries in the air. So there’s a bit of a potato theme going on here…

You recently released your debut album, Speak in Rhythms, what can you tell us about the writing process behind the album?

Speak in Rhythms was a labour of love for about two years before it came into physical existence. I wrote the songs and brought them to my bandmates Pat and Marek for arrangements, fine-tunings, and their own personal touches. Some of the songs are simply about love and life but many of the lyrics step into wonderings, observations or questions surrounding the state of our current world.

Is there a certain song on the album that you were most excited for fans to hear?

I was pretty excited for our fans to hear the new version of Roots since this song had previously been released on a self-produced EP. I think the new recording shows our growth in the past few years, and also features new musicianship, as we were joined by Victoria’s Fox Glove on female back-up vocals and Vancouver’s horn players: Kent Wallace, Eli Bennett and Rod Murray in the studio. Liam O’Neil (The Stills, Kings of Leon) also tickles the keys on a handful of the tracks on the album, including Roots.

You released a video for your latest single, “Roots” last month, what was the inspiration behind that video?

We had a lot of fun creating the music video for Roots. When we sat down to develop an idea we realized that we could do just about anything we wanted to, creating animal masks and running around in a forest included. The concept hints at the lyrics in the song, describing loneliness eased by connecting with friends and loved ones.

Making the masks and the wooden instruments was such a fun process. We had a few creative friends who thankfully stepped in and helped us out big time (high fives to Johnny, Nicole, and Sarah!). And of course, gathering the actual footage was awesome too because it was simply a day in the trees and we can’t complain about that!

You’ve been on tour throughout January and February and into March with upcoming shows in Toronto, Burnstown, and London, what can someone who has yet to see you perform live expect from your performance?

We have a lot of fun on stage and don’t take ourselves too seriously. A new listener can expect to hear a lot of variety in our music, as we tend to pull from multiple genres and influences to create our “west coast soul” style. Our rhythm section grooves, our keyboardist shreds and our guitars dance between soloing, plucking, sliding and strumming. Occasionally the fiddle will make an appearance. Vocally, we are a female lead supported by male harmonies, and we often share four-part harmonies throughout the set.

You have performed in support of such acts as Ziggy Marley, Said the Whale and Current Swell. Who else would you like to tour with in the future?

We fantasize about hitting the road with one band and opening for them night after night. I think the biggest names we’ve dreamed about touring with lately are Feist or Bahamas. I get butterflies in my stomach just thinking about it!

Songwriting, collaboration and lots of live performance. There was a long-ish waiting process before Speak in Rhythms was finally ready to be released. Now that it’s out, we’re chomping at the bit to keep up the momentum and continue pushing forward into the rest of Canada and hopefully beyond..

Canadian Beats is all about Canadian music, who are your current favourite Canadian artists?

A big fat thank you for showing up, listening, and supporting us along the way. Carmanah’s five misfits can’t really see ourselves loving anything quite as much as we love playing music… so we are incredibly grateful to the people who continue to make this dream possible.