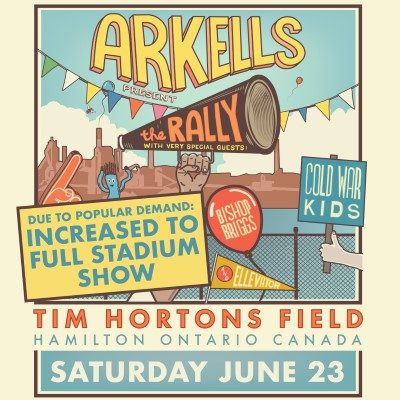 Due to an overwhelming demand, Arkells have upgraded their hometown show on June 23rd to a full stadium experience. “The Rally” has now opened up $26 tickets in the upper bowl of the Tim Hortons Field in Hamilton, ON, floor and lower bowl tickets are still available as well. The band first announced “THE RALLY” earlier this year, with a little help from Canada’s 2018 Olympic Flag-bearers, Olympic figure skating champions, Tessa Virtue and Scott Moir (watch here: https://twitter.com/arkellsmusic/status/961977752638361600)

“We’re blown away by the response to THE RALLY. It’s already our biggest show ever, and we’re still four months out. It’s hard to express how lucky we feel! We’re opening the upper bowl with the hopes of getting the entire Golden Horseshoe to Hamilton for the weekend. The dream is to have $26 cheap seats feeling like a party. So round up a car full of friends and make it a night in Hamilton. See you at THE RALLY.” – Arkells