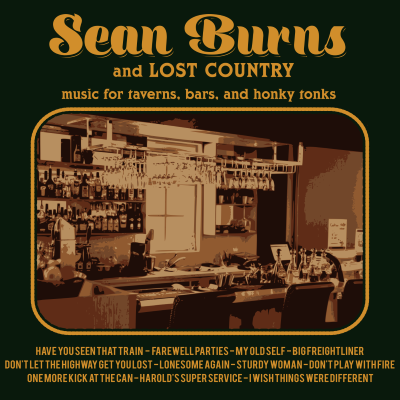 The album starts off with a track called “Have you seen that train” and immediately you know you are listening to one of the best traditional country releases in a long time. You can feel the obvious influences of country legends like Merle Haggard and Buck Owens. Burns has the raw yet smooth country vocals that pull together an album of this caliber, and the steel guitar sounds on the album are a reminder of what most modern country is missing.

The second track “Farewell Parties” quickly becomes a favourite, sounding like a classic country heartbreak song but adding a little bit of humour with lyrics like “she’s throwing farewell parties and I haven’t even left yet”. “Big Freightliner” is a song that makes you want to throw your boots on and hit the dance floor at the nearest honky tonk. I probably listened to it the most. “Old self” is an ode to the good old days, that maybe in perspective weren’t that great. And fighting the demons you met along the way. Another song I really enjoyed was “Please don’t play with fire”, the track seems to play with genres, dancing between the classic country vibe of the album but adding in a bluesy, Elvis type feel. It displays not only the amazing guitar talent, but also the diversity in Sean Burn’s vocals, and songwriting that really pull the entire album together.

All in all the album is a great addition to a country fans playlist. And not the modern country music fan, but the classic, old-school country fan. Music for taverns, bars, and Honky Tonks is absolutely everything the current country scene is lacking, taking country music back to its roots.