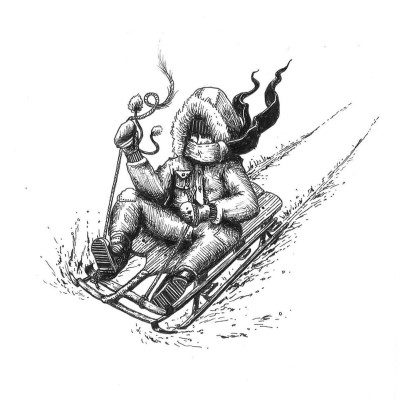 Hailing from Ontario, Oh Geronimo has unleashed their most recent album, The Sled, to the music scene. The five-piece band consisting of  Ciarán Downes, Drew Mattiacci, Kyle Robertson, Nick Toews, and T.J. Bowman recorded their album during the Spring of 2017.

According to the band, “the release of this record will mark one year since half of our band put down their torches – a year that demanded patience, persistence, and resilience. The universe often taunts us to throw in the towel, but we’re fighters. We will never extinguish the fire, and The Sled solidifies that resolution.”

The first track, “No More Stones”, begins by bringing us right into the music and setting us up for the greatness that is to follow. This tune is reminiscent of the late 90s, early 2000’s era and will definitely capture attention through its very melodic feel.

Released as the first track off the album, “Mountains” is a solid tune with an upbeat and hopeful melody. According to the band, “‘Mountains’ is about never giving up while straddling the fragile line between ambition and humility. Everybody wants to be successful and sometimes we go to great lengths to achieve what we want to achieve, but it’s very important to keep our ego in-check.” It has a very grounding message to send out to the world; that we should not change who we are because of success. Overall, the band states that “this song is about withstanding the pressure to compromise who we are in order to be successful.”

“Hope is a Gateway Drug”  is a very dynamic tune, with a lot of ups and downs in the music. The quiet, less complex part of the music puts an emphasis on the vocal; a great effect to help capture the attention of the audience and create emotion.

The title track of the album, “The Sled”, is probably one of my favorites. The emotion-filled lyrics include a quote that we should all consider as we continue to live the best life for us – “But now I see there’s no such thing as fate. I am the sum of the choices I make.” These lyrics are paired with just the right musical arrangement to allow us to picture the different stages of our lives as things change. And we have to remember that no matter what we are not in this journey alone.

The final track, “Souvenir” is another emotion filled song as they explain how it feels to be in a band – “I know most of you have never been in a band but I will do my best to help you understand.” Many people look at musical artists and feel that they have it made. A lot of us fail to see everything that happens behind the scene; the struggles, the emotions, the work. The band has stated that there had been some big changes to the band over the past few years. I feel that this song is probably a tribute to the band that was, a final farewell before they move on to the band of the future.

According to the band, The Sled “traverses the peaks and valleys of companionship, ego, self-perception, and explores what happens when they collide.” The messages they share allow us to take a step back and reevaluate. So take the time and listen. This may be just the clarity you need!