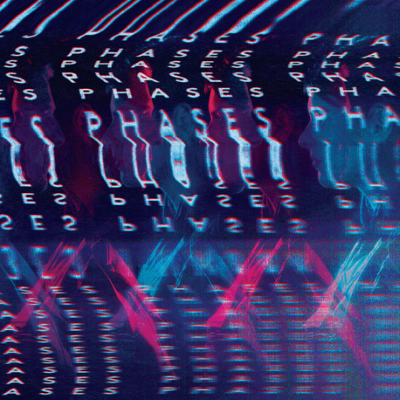 Phases opens with the bright and hopeful rhythms of “Wicked Thing”, a song brimming with lush synths and Danielle’s soft and powerful vocals.  The following track, “Live Through The Night”, is driven by a weaving and fuzzy bass line that dances around a rhythmic electronic drum pattern and Danielle’s vocals.  Quite contrastingly, where “Wicked Things” felt optimistic and cheerful, “Live Through The Night” has a sense of darkness and mystery to it.  It is such a juxtaposition that makes Phases such a compelling record.  Dear Rouge refer to this as “grit and gloss” and it is an absolute central aspect to their material.  While most indie artists – of both the pop and rock streams – would rather hang in the light with a collection of cheery tunes, Dear Rouge would rather dance in the dark, embracing a far wider range of emotions and moods.

While this contrast is among the most interesting aspects of the record, the best songs on Phases are the ones that feel more at home among the gritty.  “Boys & Blondes”, the lead single, is a prime example of this. While fueled by a dance beat reminiscent of disco-era trends, the song is among the best of the record for its contrasting darker vibes which largely come from Danielle’s raspy, breathy, and sliding vocals.  “Boys & Blondes” is one of her best vocal performances on the record and demands all of your attention – whether it be for her slinky quality in the verse, or her explosive belting in the chorus.  The records second single, “Modern Shakedown” is just as exciting and perhaps the darkest on the record.  Sonically, it sounds as if July Talk had collided with Marilyn Manson, and while on paper that sounds like a recipe for disaster, it makes for a track that is nothing short of exceptional.

Dear Rouge shine from front to back across their sophomore full-length release.  Over the course of its ten tracks, every song delivers something exciting, giving cause to herald Dear Rouge as a group on the verge of revolutionizing indie rock and pop.  Furthermore, this is a record that could successfully compete for the attention of a wide mainstream pop audience against the genres titans – Taylor Swift, Lady Gaga, and Katy Perry to name a few – and come out on top.  Phases is without a doubt a must hear record and a definitive sound for indie pop.