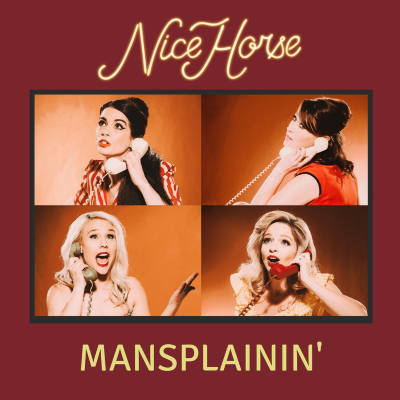 Calgary’s own Nice Horse have released a video for their new single, “Mansplainin'” in celebration of International Women’s Day. The video which was directed by Lisa Mann depicts the group’s trials with men, and their tenacity to push from progress. The single is from Nice Horse’s debut LP, There Goes The Neighbourhood, and is a fitting feminist anthem.

In addition to the video release, Nice Horse premiered a live version of the track alongside Canadian artists, Brooklyn Doran, Iskwe and Witch Prophet at a special International Women’s Day event at Facebook Canada headquarters yesterday.

“We are one of the few self-contained, all female country band so we get a lot of comments about that. While working on our new album with producer Jeff Dalziel, we’d often come into the studio with stories about things that had happened to us as women in the industry, from people thinking we needed help choosing drumsticks to men assuming the gear we were buying was for our boyfriends. We used the term ‘mansplaining’ a lot!” the band comments. “This was something our non-mansplaining producer hadn’t heard a lot of before and he couldn’t believe the stories we’d tell him! He really encouraged us to write a song about it, and set us up with another female who he thought would also have experienced the same thing, Tareya Green. It’s not at all a man-bashing song – we love men! It’s just an experience that most women can relate to, and we had a lot of fun writing it.”

The band had Lisa Mann direct the video with the help of a women-strong crew to produce the visuals, which are an absolutely perfect pairing for the song,

“Our director is the incredible Lisa Mann, one of very few female directors, and she’s been doing it for a long time,” says the band. “Katie first worked with her when she was the lead singer of the industrial rock band, Jakalope. At the time, Katie was also one of the few women in the industrial rock genre. The videos Lisa did during Katie’s time in Jakalope garnered them four MuchMusic Video Award nominations. When it was time to make this video, we all knew Lisa was the perfect director for our vision and we are so happy to have her on this project.”