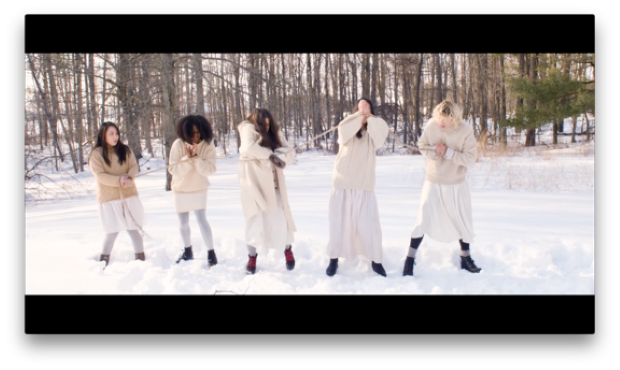 Toronto’s own Skye Wallace has released her new single, “Swing Batter” along with a powerful video in celebration of International Women’s Day. Skye will perform tonight in partnership with Toronto Womxn in Music and herHABITAT, and in support of Sistering – a multi-service agency for at-risk, socially isolated women in Toronto – the show will take place tonight at Array Music and will feature sets by Skye, Lydia Persaud, Winona Wilde, Merival, and jes sachse, as well as pop-up vendors from NEW FRDM and Knot Naked. The event is sponsored by She Does The City and Beau’s.

The single brings to life the emotional story of domestic abuse and women’s rights in Canada surrounding the 1911 trial of Angelina Napolitano in Sault Ste Marie. The powerful music video was directed by Sam Soo. Skye shares thoughts on the song,

“Swing Batter was inspired by this powerful story that moved me; one that I know has moved many. I wanted to create something that was visceral and emotional, to reflect how I felt when I first learned about it. The story behind the song is based in a historical context, one that permeates with a fledgling strength that is now very powerful amid our current social climate.”

After enduring years of severe physical and emotional abuse from her husband, Angelina was eventually pushed to murdering him with an axe.  She was pregnant at the time of her initial trial and was sentenced to be executed following the birth. In the months following this verdict, Angelina’s case attracted international uproar, especially amongst fledgling feminist groups. Many argued the years of abuse constituted self-defense; her case was reopened and her sentence was commuted to life imprisonment. Angelina was released 11 years later, and her story continues to impact the Canadian public’s view of domestic abuse and women’s rights.

Skye continues, “Angelina’s story is an insight into how the shift has happened in the past, and how we need to perpetuate that shift by working hard, being inclusive, vocal, and active, and educating ourselves and others.”