Countdown to 2018 ECMAs – Interview with Tactus 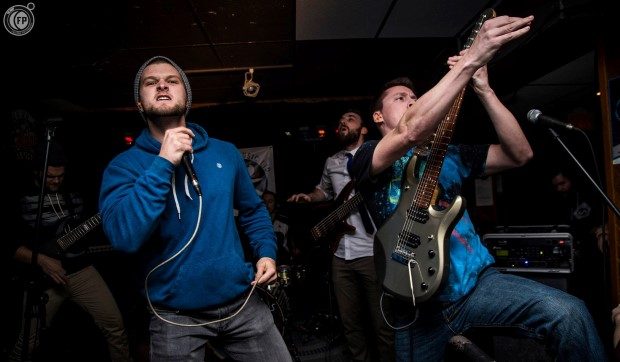 ECMA 2018 takes place from May 2-6 in Halifax, NS. With so many talented East Coast artists up for awards, we knew we had to chat with some of them in anticipation of the big event! Every week from now until May 4, we will be chatting with a nominee. For our first interview, we spoke with the Fredericton, NB-based five-piece progressive metal band, Tactus. Tactus is nominated for Loud Recording of the Year for Bending Light.

Hi! We are Tactus – a five-piece progressive metal group from Fredericton, NB. We’ve been playing together since we were university together in 2011, and we mostly produce our own music. Our nominated album, Bending Light, is our first full length.

You are nominated for the East Coast Music Awards this year, what was your reaction when you found out you were nominated?

We were all very excited! The band is a passion project for us, so to achieve this level of recognition for something that we pieced together in an apartment bedroom over two years in our spare time is just really overwhelming. It’s almost surreal.

Is this your first nomination?

Yes! We released an EP in 2014 that did not meet any criteria for the ECMAs, so we were really excited that our first opportunity to submit resulted in a nomination.

What are you most looking forward to at 2018 ECMAs in Halifax this May?

Music everywhere! We’re probably most looking forward to the showcases; especially seeing our fellow metal/rock bands at the Loud showcase.

Do you have any memorable stories from previous ECMAs?

This will be the first time for all of us actually! But lots of our friends have been before and assure us there’s lots to be excited about!

Will you be performing anywhere that you can tell us about during the 2018 East Coast Music Awards, Festival & Conference?

Yes! We are really excited about it as well – we’ll be performing at the Loud showcase. Date/venue are still TBA, but you’ll find the details on our Facebook as soon as it’s announced.

If someone has yet to catch you live, what can be expected from your live performance?

We put a lot of focus on making sure our live performances are note-for-note with the recordings, but with little bits of flare and stylistic surprises. We also really love to engage our audience as much as possible.

You are nominated up against many talented East Coast artists, who are you looking forward to checking out in Halifax?

Too many to list, but like we said we are most excited about those sharing the Loud stage with us!

If you were asked to give an up-and-comer some advice, what would that advice be?

It’s a tough market down East, especially for niche genres and heavier music. The best advice we can give is to just make sure that you make time for the things you love to do, and make sure the music you’re playing is something you’re excited about – otherwise, it’s tough to keep up the passion and drive that are required to succeed out here.

Speaking of up-and-coming East Coast artists, we are always happy to find new artists to check out, can you recommend any up-and-comers for us to check out?

There is a group of young guys from Saint John in a turbo metal group called Elevate The Virus that we think people really need to pay attention to. And if you’re a fan of 80s power metal and Van Halen, you’ve gotta check out Monteith from Woodstock, they’re insane.

Now’s your chance to plug your new music, tours or anything else, what do you have going on this year?

We’ve just released a new single called Glass Atlas (available on the usual digital services) that we’re hoping we’ll have lots of opportunities play around the Maritimes this year. We’re also hard at work on our follow-up to Bending Light, which will hopefully be completed this year.

Thank you so much for bringing us this far! We love you, and keep your ear to the ground for news and new material from us this year!