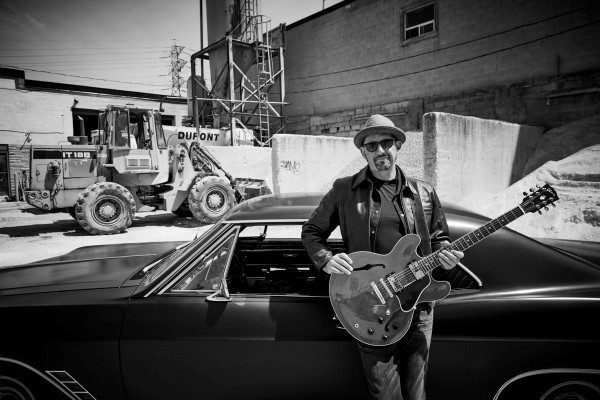 Is Steve Strongman blues? Jazz? Rock? You could answer any or all of the above, but one thing’s for sure; this guy’s got groove for days! With five albums under his belt and countless award nominations, Steve could very well be that guy that brings his guitar out at every party and leaves people begging him not to put it away.

First off, congratulations on your newest album, No Time Like Now, on being nominated for the JUNO’s Blues Album of the Year! When you’re creating an album, do you have awards in mind or is that just a bonus?

It’s a huge bonus. I don’t think any artist sets out to write music with awards in mind, however, it’s always very nice to get that kind of recognition for something that you’ve worked so hard on.

Many of the tracks on the album have this tough, driving beat to go along with the smooth blues melodies; this is such a great combo! I imagine that vibe is even more powerful when played live, so how do you prepare to bring the songs to the stage?

Thank you! It can be tricky to play these new songs live as I am currently touring as a trio, so it’s exciting to rework the songs to have them still hit home with an audience. Having said that, there is so much raw energy to the material, it really comes across in a live environment, it’s exciting.

Speaking of the live show, you’ve had the chance to open for some absolute legends including B.B. King, Buddy Guy, and Johnny Winter! What’s the most important thing you learned from those experiences?

I would say all the amazing artists I have opened for have one thing in common; they’ve all worked incredibly hard to get to where they are…I also learned that they really know how to command a stage, especially BB King and Buddy Guy. The entertainment value of the show is undeniable.

On the new album, you cover BTO’s “You Ain’t Seen Nothing Yet” (featuring BTO founding member Randy Bachman) with a cool, jazzy twist. What’s your favourite part of choosing covers to do?

Playing covers is rare for me, I usually only record material I’ve written. I just thought this was an amazing song, and Randy is such an incredible writer. It was the first song that came into my head when my producer Rob Szabo asked me about doing a cover. I’m really pleased with the way it’s turned out, and to have Randy play guitar on it was like the icing on the cake.

I read that you and your wife Meredith have been together since 1994; a feat in the eyes of many these days! Does she heavily influence the musical decisions you make?

Like any relationship, she’s a huge part of all the decisions I make, I always throw around ideas with her, but she usually likes the to hear the finished product rather than be a part of the musical process. She’s a huge music fan though and of course, we make long-term touring plans and big picture career decisions together.

More touring! Last month I was in Memphis, last week I was in Western Canada, and this summer I’m heading to Europe for a tour…I’ve started writing and thinking about the next record, which will likely come out in Fall of 2019.