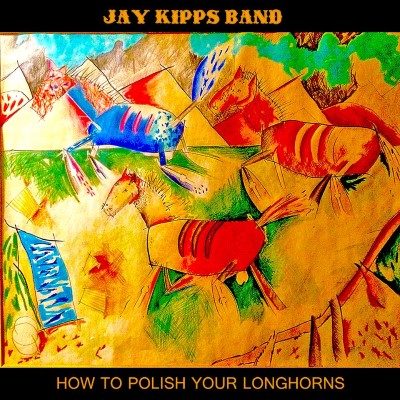 Orangeville, Ontario-natives Jay Kipps Band have released their full-length debut album, How To Polish Your Longhorns.

You might feel like you’re in a classic western with the opening track “Colt 45” – an instrumental number featuring only a background of “ooohs” to follow.  “Rotton Apple Blues” kicks off with a gorgeous harmonica solo as Jay Kipps croons over his mission to get back to his girl. It doesn’t take much to feel the soul in these songs. In “Everyone But Me” you’ll hear the melancholy aching of a man without someone to turn to.

Bringing up the energy is “Big Old Engine” – followed by the sultry guitar and crooning of “Hard Core” featuring a beautiful female accompaniment. From there it moves to “Sinister” and its sexy guitar licks, almost reminiscent of indie-rock bands like The Virgins.  Perhaps one of the shining moments on the album comes from “The Only Reason” with lyrics like ‘If you’ll still follow me. I’ll try and be the man you seek. Love you til’ the sun sets on my soul.’

Coming off the romance of “The Only Reason” is “Harp Bomb”; a feel-good instrumental jam with that gorgeous harmonica.  “Gonzo (Live)” lets you feel like you’re experiencing Jay Kipps Band right there in your room – it has some of the grooviest guitar licks I’ve heard in a long time, where Jay performs his lyrics in a poetry slam-style.  Another live audio performance for “Call Me The Breeze” which is another feel-good track that you need on your next road trip playlist. We end the album with “Surffaire”; another instrumental jam that’s all 60s-influenced rock/blues.

Their debut is impressively crafted for a band that’s only been in the game since 2015; blending the soulfulness of the blues and the technique of Roots and Americana.  The way they write their songs and the ease in which they craft their lyrics feels both nostalgic and new – a breath of fresh air in modern music. They have a few tour dates coming up this year – you’ll want to catch these songs live.