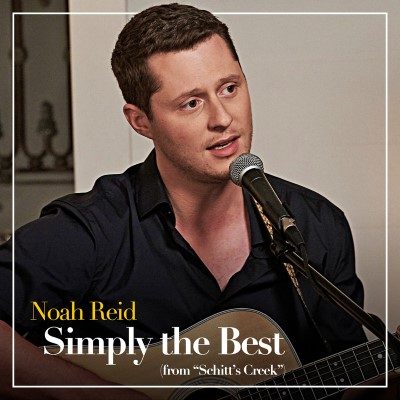 You might recognize Noah Reid from his latest role on the hit comedy show, Schitt’s Creek or from many of his other artistic acting and musical ventures including the release of his 2016 independent album, Songs From A Broken Chair. Reid has consistently worked on various television, film, stage, and musical projects for over two decades including voice acting where Reid voiced the beloved character of Franklin the turtle from the animated series Franklin.

Presently, Reid is currently sitting in the number one spot on the iTunes Canada Soundtrack Chart, for his cover of the 1989 hit Tina Turner single, “Simply The Best.” Reid performed the song on the latest episode of Schitt’s Creek which aired on February 27th, 2018 on CBC. Reid’s version is holding onto the number one spot on the iTunes chart as the single is gaining major traction and praise around social media. Available for purchase on iTunes and for streaming on Spotify, all proceeds from the cover will be donated to the LGBT Youth Line.

Musically Reid takes the song from the rocking anthem that we know and turns it into an acoustic and intimate song. With his smooth vocals and delicate phrasing, it brings the song to life once again as he delivers it on the series. On Schitt’s Creek Reid plays the role of Patrick, who is the love interest of one of the main characters, David Rose who is played by Daniel Levy. The song is a sign of affection between the two characters and is captured in Reid’s performance. You can check out a sneak peek on Facebook of Reid’s performance