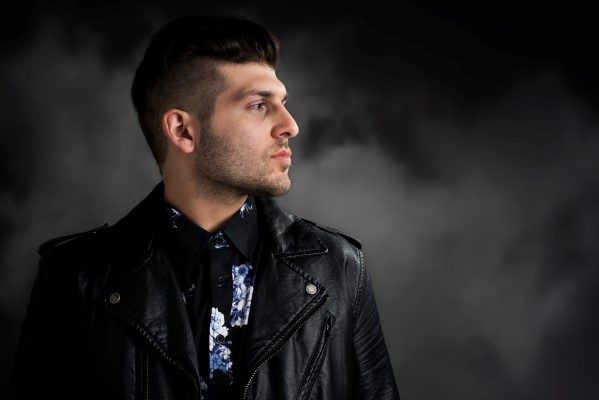 Toronto based singer-songwriter, Sam Louis has released a video for his newest single, “Wild Days”. The single is from his upcoming EP, which is slated for release this fall, and if “Wild Days” is any indication of what’s to come, I personally cannot wait for the EP. Sit back, turn up your volume and enjoy this brand new party anthem. While you’re at it, check out our interview with Sam below.

Hi Sam, please tell our readers a little bit about yourself.

My name is Sam Louis. I’m a singer/songwriter originally hailing from Thunder Bay, currently living in Toronto. I graduated from the Contemporary Music Bachelors degree program at Humber College, majoring in vocal performance. I’ve been singing and writing for 15 years, some influences of mine are, Michael Jackson, the Red Hot Chilli Peppers, Justin Timberlake, The Trews and The Weeknd.

You have a background in musical theatre, how would you say this has helped shape the musician you’ve become?

Musical theatre was another avenue that I explored earlier in my music career. It was another way for me to perform and tell stories. I got lucky enough to be apart of more than 25 musicals back home in Thunder Bay and 4, here in Toronto. Each one pushing my voice further and further, and helping me feel more at home on stage. My musical background made me a stronger and more conscious performer. It gave me confidence and enhanced my performance experience, teaching me how to connect and relate through passion.

You just released a new single entitled “Wild Days”, what can you tell us about the writing process behind the song?

“Wild Days” was an idea about two years ago. I was watching a movie and Teenage Wasteland by The Who started playing. I loved the anthematic quality that the song had. I wanted to inspire that similar emotion in a modern pop song but still evoke the same freedom and warmth you find in those late 70’s/80’s rock anthems. The intro chord pattern came first and the song just flowed into itself. I originally thought the chorus idea I had would be too hard to sing, so I was trying out different alternatives. But after playing through it so much during the writing process, I got comfortable singing it, and it stuck!

The video that accompanies the single seems like it was a lot of fun to shoot, what was the highlight?

The “Wild Days” video was one of the most surreal experiences of my life. My favourite scene would have to be the morning we drove out to Antelope Valley at 5 am to catch the sunrise in the middle of the desert. We got to drive around in quads, waving smoke grenades and spinning fire while drones were flying over top gathering the landscape, it was an experience I’ll never forget.

How did you come up with the concept of the video?

The concept of the video was a collaboration between myself, my sister Angelica Migliazza and her partner Jordan Lunsford. I had been visualizing and contextualizing the desert scene with my sister for a while, we had so many ideas but didn’t know if we’d be able to execute them effectively. It was the most ambitious scene, it had to be because it was the opening sequence. My sister scouted out the rest of the locations for the video, each one dynamically different and contrasting. All the beautiful environments we got to shoot at allowed us to embody the freeness of the song and the video started to feel more organic. We stopped acting and began capturing pure experience and emotion.

You worked with Spaced Visuals, which is a company owned and run by your sister, Angelica Migliazza and her partner, Jordan Lunsford to shoot the video at various sites in LA, is there a reason you chose LA as the video backdrop?

Spaced Visuals is a company that conceptualizes your dreams and makes them come alive right in front of your eyes. Working with my sister, Angelica and her partner Jordan was one of the most comfortable and inspirational experiences. I chose LA as the backdrop for many reasons, the vibe, the feel of the song, the energy and the beauty of the city, but mostly it allowed me to collaborate and create something with family.

This track could certainly be called a party anthem, is that what you were going for?

Thank you, the vision I had for “Wild Days” was inspired by some pretty big anthems so that means the world. I wanted Wild Days to be this coming of age, 70’s inspired pop/rock anthem. Mimicking tones of Teenage Wasteland, I wanted the track to take our youth on an exhilarating eye-opening journey of freedom and power. Some of us are living in their own wild days right now, and we need to become aware of that.
You will be releasing your EP this fall, but until then, what else can fans expect from you? Do you have any upcoming shows?

I will be releasing my 7 track EP, “Hallelujah Nights” this summer, but before then you can catch myself and my band performing at Canadian Music Week in May. We also have some shows lined up in April, on on the 7th at The Hideout for their new competition “The Bout” and on April 19th. People can keep up to date with of our shows through my website and socials, which can be found below.

How would you explain your live performances?

People explain our live show as an experience, that’s one of the goals of my music, to create and tell stories through sound. Music is just a platform, a channel that we can all connect to. When we hit the stage as a five-piece, we all aim to connect with the audience and allow them to escape into the music.
Last but not least, is there anything you’d like to say to your fans?

I just want to say that everything we’ve built and arrived at today is because of people who believe and trust in myself and my music. And for that I want to say, thank you. I’ve surrounded myself with a team, everyone inspires the sound of Sam Louis and our journey is just beginning.