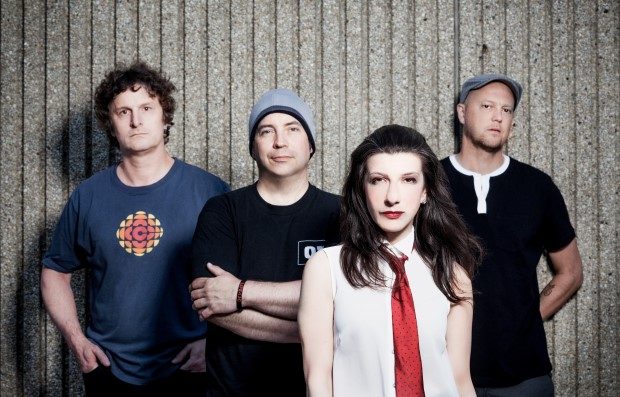 It’s taken 25 years for an official comeback, but Canadian Alt-Rockers Acid Test are here to treat your ears to a new single, new EP, and new video. It may have taken them two and a half decades, but they’re back and ready to roll. Follow along as I chat with them about why there was such a long break in between the passing of their bandmate, and the music industry today. If you know them, here’s a chance to catch up! If you don’t know them, here’s a chance to find out a little bit more on a band that loved the 90s and is back for more!

The band will be hosting an album release party at The Garrison in Toronto on April 28, you can find more information on the event HERE.

Why did it take over 25 years before you decided to create new music?

Atom: Back in the 90’s we all sort of went on hiatus when we left our label – we’d definitely hit some good highs in our time back then, like getting signed, decent media play, touring like crazy etc. When that ended, we sort of had the steam knocked out of us, so we all went our separate ways for a while.

I went on to work with other bands like with Econoline Crush and Bif Naked, then got more into the production side of things. Steve and Lucy formed a few bands like Innerstate and On, Mike was producing hip-hop and playing in more experimental bands like 10,000 Watt Head…

Lucy: Other things in life happened I guess, like us all moving to different provinces!  But we always stayed in touch, and always talked about hooking back up and playing together again.

What is different between 1992 you and present you?

Atom: I’d say we have a much better idea of how to effectively write our kinds of songs, and a greater understanding of what it takes to be serious musicians. For me, when I started in Acid Test, I’d just barely graduated high school and went on the road shortly after that. It was an adventure and totally worth every difficult minute, but I simply didn’t have a clue about a lot of how things really ‘worked’ in my new calling, and had quite a lot of misconceptions.

The older me sometimes finds frustration with my younger self in that I think I could have maybe paid a bit closer attention, and cherished that time I had more. Less party, more gratitude, and working harder to take better care of myself, mentally and physically – we now we know what we had then, and how much work it took to get there.

Do you find it easier or more difficult now that technology has changed so drastically since the 90s?

Lucy: It’s certainly easier to DIY it now – I think it’s great, doing what we did for this record, like demoing our album from 4 different provinces over computers, phones, then getting back in touch with our fans 25 years later with the ease of the internet.  It would have been impossible to do anything comparable with early 90s technology.

Atom: In some ways, it’s gotten a lot easier in terms of music production – it’s pretty much instant gratification, low cost, you just need a computer and some software.  Being a keyboard player in the 90s was my gateway to digital recording – a lot of software that people use now for tracking music in their homes mostly originated as MIDI sequencers, and keyboard players were in on the ground floor for that, so I consider myself lucky.

But generally, I’ve also found that the amount of time it takes to actually make a record is pretty much the same between digital and tape.  You can put the time in front writing awesome songs, getting solid performances and not have to mix much or spend all your time splicing and bashing something together from recorded bits and pieces in post and mixing. Either way, you can get a result, it depends on where you place your focus, but technology isn’t always a time saver.

I admit sometimes a lot of modern production makes me a little romantic for the tape days – you just had to be really good, and commit 100% to what you put down. I think sometimes trying to limit editing and post work is a good discipline to have.

Do you have any current influences that help inspire you to create music today?

Lucy: The band itself always had pretty eclectic tastes from member to member – I’m a super big Tool fan, and Royal Blood are pretty awesome, but I’ve also been grounded in psychedelic rock and funk. Steve’s always been a hard rock kind of person, and our new drummer Tim has more progressive rock leanings.  It might explain why our songs stylistically have always been a bit random on our albums!

Atom: My background is electronic music, so my influences still reflect that.  The latest Tricky release is great, and I just recently bought the new Odonis Odonis record and think it’s fantastic. Actors out of Vancouver are very cool, and I’ve also been a long time fan of both Austra and Grimes.  On the lighter side, there’s a band out of Quebec called Paupière that I really dig (you just can’t beat some solid French electropop), in terms of more rock sounds the new Ride record is really top notch.

Describe yourself for those who don’t know who Acid Test are!

Lucy: We’re an alt-rock alt-electronic band that came up in the Toronto scene in the 90s.  Our sound is heavy, honest, and we kick ass live.

Did the passing of your bandmate help drive you to want to perform again?

Atom: Honestly for me at first, it was the opposite – Mike was always the catalyst for stuff in our ‘band’ life. We were fast friends in high school and he’s the reason why I wound up in Acid Test in the first place. We hadn’t spoken for a few years before he passed away, and he was also the one who was probably pushing a reunion the most.

We were pretty much the same age and when he suddenly wasn’t there, and I struggled a lot more with his loss than expected to.  It was so sudden, scary, and sad all at the same time. In terms of the band, him being suddenly gone made me feel, ‘well, I guess that’s it for that’. It made me grieve him even more, because he was so talented, and was the free spirit of the group. The idea of not him being there, or possibly replacing him at the time seemed very incorrect to me.

It was Steve and Lucy reaching out, and our friend Ted (also a high school friend of Mike who’s going to be doing more DJ related things with our live show) who convinced me that we did have some unfinished business, no matter who or what we’d lost, it had to get done, the ideas we had started were still valid.

Lucy: Some of those early conversations were among the best dialogs that we’d ever had as a group, even compared to when we were living together on tour. It was difficult at times trying to reconnect, but in the end, it was very healing on a lot of levels.  So we named the album after his DJ moniker ‘Jus’ Rite’ and somehow when we decided to do that, getting back together and playing again just needed to happen.

If you could tour with anybody in today’s music industry, who would you choose?

What is the inspiration behind “Slipping Away”?

Lucy: It’s basically a song about our ongoing history as a group, it talks about things we went through in the 90s, but it’s also our declaration, that all those things that made going on difficult in our past are no longer holding us back right now and in the future. Affirmation, with some kick-ass attitude thrown in.

The video for “Slipping Away” has a distinct 90s alternative vibe. Did you do that to pay homage to your roots or for another reason?

Lucy: Well, going back to that DIY thing… the video was conceived as a way to make something that we could all do from our current locations.  So each band member shot everything on their own and sent it the digital footage to our director to put it together into what you see now.

All the overlapping graphic effects, the weird CCTV feel applied, definitely tie it back to similar videos we made back in the day. We’re really happy with it!

Your EP, Jus’ Rite will be released on April 27, what can you tell us about the writing process of the EP?

Atom: Being all in different places, we definitely used a lot of remote web technology.  For demoing our tracks we didn’t concern ourselves with fidelity – if Steve had a guitar riff, or Lucy had a vocal idea, I’d get them to track it into their phones and then use Dropbox to post the files.

I’d then build sequences in Protools using those really rough concepts, simple beats, keys, even my own scratch vocals. I’d come up with an arrangement, key adjustments, tempo, and then send it back out to the band as an MP3, to see if there was anything else they could add. We’d keep sending back and forth like that until we were all happy with the overall vibe for each track.

Lyrically we all contributed something – Lucy did most of the heavy lifting, but there’s at least one track that everyone essentially wrote the lyrics to completely on this record.

Lucy: When we were happy with what we had song wise, we booked a studio and redid everything on a professional studio level. It was a bit time consuming to get to that point, but we were all very confident in what we were doing when the time came to put things down properly. Having everything clearly outlined saved us quite a bit of time in tracking.

Is there a certain track on the EP that you are excited for fans to hear?

Atom: The last track on the album is called ‘Sugarbowl’ – it starts out ambient and kinda lounge-y, then moves into a guitar wall of noise rock thing, then at the end, fades into verb-y space. We’ve always had an eclectic sound, but out of all the tracks on this record, it’s some new territory we never tread on it before that I think sounds surprisingly cool. I hope people agree with me on that…