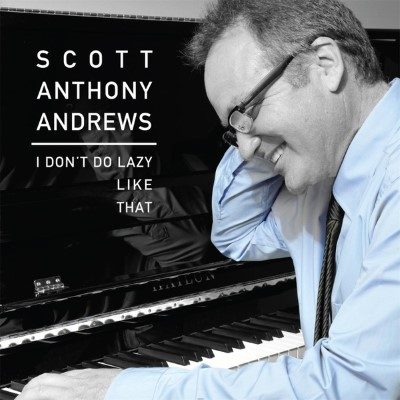 Returning with his third full-length release, Regina’s Scott Anthony Andrews has released I Don’t Do Lazy Like That.  The twelve track album is a broad collection contemporary pop music that touches on a variety of styles ranging from smooth jazz to 80’s pop.

I Don’t Do Lazy Like That opens with “Isn’t That Why You Came”, a track that takes influence from the crooner side of pop from the 1980’s in tune with Rick Astley’s “Never Gonna Give You Up” and Gerry Rafferty’s “Baker Street”- only without such a memorable instrumental hook. The album continues to roll on with the mildly bluesy “Wisdom Is Waitin’ On Me” and the smooth jazz bop of the album’s title track where Andrews’ stretches his vocals to sound like a lounge singer, while “Feel It In Your Bones” sees him tackle a watered down Steely Dan styled track.  While highly ambitious, Andrews struggles to find a foundation on I Don’t Do Lazy Like That.  The record may have its strongest connection to smooth and lounge jazz, but there are so many other elements to it that it doesn’t truly feel at home their either, making the album feel less coherent than it should.

Andrews shines at his best when performing upbeat contemporary pop tunes that feature a jazz flair to them.  Songs like “Running Away With The Stars” and “Jazz On The Harbour” sound best with their use of a tight rhythm section and swelling horns that allow for Andrews vocals to soar above.  Similarly, many of the ballads further this as well, including “And I Wanted To” and the album closer, “Light A Candle For A Dance”.  As creative as he is, Andrews has certainly found his niche when he strays from the additional elements on the record – rock, pop, and the blues- and writes his songs with a smooth jazz feel.

I Don’t Do Lazy Like That, despite its flaws, is a record with a handful of excellent tracks.  While it would have been better suited as an EP, Andrews’ third shot at a record is one that fans of smooth jazz should enjoy flipping through.