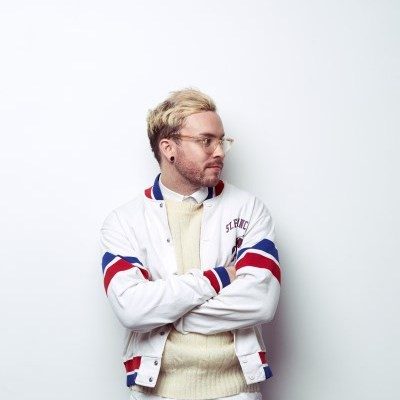 Toronto-based pop artist, DCF (David Charles Fischer) took some time out of his insanely busy touring schedule with Lights to chat with us about his new single, upcoming album, current tour and even shares who he would love to tour with in the future! Enjoy!

Yes! My name is DCF and I am the self-proclaimed prince of Toronto pop music lol

You recently released your new single, “Bring a Friend”, care to share where the inspiration behind this song came from?

You also released a video for “Bring a Friend”, what was the highlight of the video shoot?

The video is basically just me and my homies hanging out doing things we would usually be doing anyway. We actually lost the footage for the karaoke scene and had to shoot it twice! Which was a blessing in disguise because certain homies could only come on the reshoot day, it felt like fate.

The video features a number of cameos, including The Darcys, Ralph and more, that must have made the shoot quite interesting, was there any other artists you hoped to include that you weren’t able to get this time around?

Haha oh ya, artists are flakey AF, myself included. There was a lot of people that were gonna roll that didn’t, but the crew that came out is the A team. You really see who the real homies are when you need people to come out to your video shoot haha Ralph is an inspirational gem tho and The Darcys have been supporting me since day one!

Your debut album is due to be released later this year, care to tell us a bit about the writing process behind the album?

It was hard growing up and being head over heels in love with pop music. It wasn’t “cool” and I found myself pretending to like a lot of music I didn’t actually like. I wanted to make a record that would kind of re-introduce me as the artist I’ve always wanted to be but maybe have just been too shy or self-conscious to be. I went back and started listening to all the music I actually liked in High School like My Chemical Romance, Bright Eyes, Postal Service and basically made a record that allowed me to let those influences shine.

You are currently on a 46 date tour with Lights, what was your first reaction when you heard you would be joining her on such a large tour?

Oh, I was soooooo stoked. Maybe a little nervous! I don’t think I’ve even played 46 shows in my career so far haha so it’s definitely an adventure.

You have toured with many other well-known Canadian artists, such as Coleman Hell and Shawn Mendes, who else would you like to tour with if given the chance?

I think female pop artists are moving the genre forward 1000 times faster than male artists are and I’d love to tour with artists like Charli XCX or Camila Cabello. Those are definitely my two favs right now!

For someone who has yet to see you perform live, what can be expected from your live set?

I honestly feel like my live set is always changing and growing, but my ultimate goal is for everybody in the crowd to have fun. I wear a prince costume when I play, mostly because it gives me confidence and lets me sort of step out of myself, but also because it’s this weird spectacle for the audience. Growing up I loved going to shows that were so much more than just the music. Come expecting to dance tho, that’s the real answer.

Once the tour ties itself up in April, what’s next on your agenda?

Just thank you! I’m playing dress up every night and living out my artistic vision exactly the way I wanted to for this tour. I was hella nervous the audiences wouldn’t get it, or be receptive to it, but every night I’m blown away by the amount of love I feel at these shows.