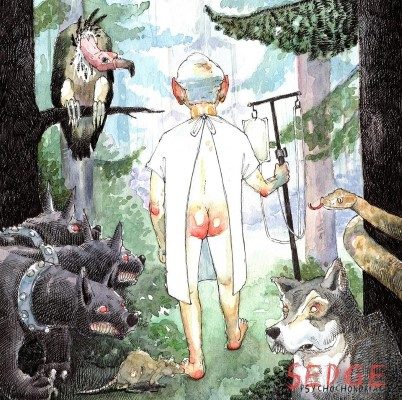 Toronto based 5-piece band Sedge released their second album Psychochondriac on January 26, 2018, as a follow up to their debut album Selective Reasoning, released in 2015. The band has stated that they have matured in their music, making this album an interesting change to their style.

The dark, grungy, garage-rock feel to this album is great. It reminds me of Kings of Leon or even The Black Keys but Sedge has their own unique sound. The lead singers deep, powerful vocals make each song exude its own feeling. “Not Ready to Die” for example starts off like a grunge song even with the lead singer hitting a high and heavy scream at the beginning.

“Fuzzy Pictures” is one of the rawest emotion songs I may have ever heard, as the lead singer is putting so much passion into the lyrics and you can feel it through his voice. The singing/screaming he does is so pure and unaltered, it shows that talent is shining through with this band and when they said they’ve grown and matured as a band, they’re proving it.

This album is what you could call a “head-bobber”. It has heavy rock and roll influences mixed with grimy, garage rock making it a very unique sounding album. As the band said, they’re growing as a band and this is release shows just that. It’s certainly going to be awesome to see if they mature even more as a band, which I don’t think will happen as they have truly found their sound.