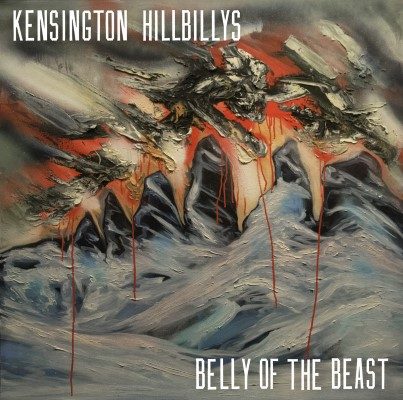 First of all, I can tell you I’ve never heard of a country/punk fusion band so I was a bit surprised to see this genre listed. Kensington Hillbillys have released a handful of albums from 2001 up to their latest release Belly of the Beast in 2017.

I was intrigued to check out this album as I’m not a country fan but am a huge fan of punk. I may have found a new genre that I’m into without even realizing it. “Down in the Dirt” starts off fast. You can hear the country tones but the vocals and speed make it a punk song. It’s an interesting song right off the bat, followed right by “Mujahideen” which is the same style.

“In Cairo” and “Swallow the Pill” are the most country songs on the album. They sound more country than punk but still consist of that interesting fusion. It’s not a bad thing by far but for someone who wasn’t ready for this mix, it may catch them off guard, but as for myself? As I listen to varied styles of music, I wasn’t surprised of how much I liked it.

Take “A Spoon That Won’t Bend”, it starts off like a punk song, even throughout the song you can hear the punk influences, the vocals, and the sputtering guitar but it still has country lyrics and music. It’s one of the most unique sounds I may have ever heard in a band and I can’t express that enough.

If you’re a fan of trying new things, this is the best band for you. Their sound is indescribable but in a good way. The mix of punk and country makes this album great and unique, a perfect combination. I suggest giving a few songs a stream and seeing if you’d love to hear more because I sure did.