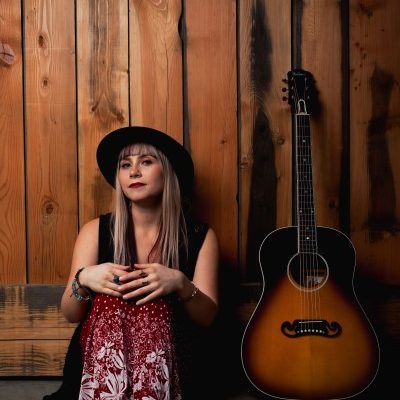 Edmonton based singer-songwriter, Erin Kay is about to release her album, Silver & Gold on March 8, 2018. Recently she released a video for her newest single, “Holding You Tonight”, which you can check out below. It’s always great to chat with talented and inspiring Canadian artists, and Erin was no exception! Find out more about her in our interview, I can guarantee you won’t regret it!

Hi Erin! Please tell our readers a little about yourself.

I am a singer-songwriter based in Edmonton. I am a mother to a beautiful 7-year-old daughter. I am lactose intolerant. I enjoy a good IPA beer. I love to cook while listening to Motown hits. I have a big dog named Cleo and I love to paint. My favourite album right now is Twin Solitude – Leif Vollebekk.

You released your first single, “Holding You Tonight” from your upcoming album, Silver & Gold earlier this month, is there a reason you chose this single as the first?

I believe it is a good introduction to the album. There are a few heavy topics on the album and I love the message of “Holding You Tonight”. Musically, it also just ended up being one of my favorite tracks on the new album.

The video was recorded live at Electric Treehouse in Edmonton, AB. Was there a highlight of the video shoot?

My highlight was having my sweet little daughter get to be in it at the beginning, I love having her be a part of what I do. Also, recording live off the floor is a fun process and it was a great group of people to do that with! We had a lot of laughs.

What made you decide to go the live video route for “Holding You Tonight”?

I think it is important for listeners to hear what I sound like live as well as hearing the new record. I wanted to have something that captured a bunch of friends singing and playing a song together, a song that has a really comforting and hopeful message, kind of like we are all in this together.

Care to share the backstory for “Holding You Tonight”?

I used to live in Williams Lake, BC. It is a small town in the interior of BC, nestled in a beautiful valley. The train would run through and I always loved the sound of the train whistle at night. It felt really comforting to me when I was going through some hard times. About 4 years ago I moved to Edmonton and was feeling homesick. I called one of my best friends who was going through a tough time that night, I heard the train whistle through the phone from her side of the line and just wanted to jump through the phone and be with her. That’s where the song was born.

You will be releasing your debut album, Silver & Gold on March 8, what can you tell us about the writing process behind the album?

I have been writing the material for this album over the last 3 years, based on what I have gone through in my life in that time and years prior. It was about me connecting to my story and not being afraid to be honest about what I have gone through.  I wanted it to be hopeful and maybe in my honesty and sincerity, inspire others that have traveled similar paths to have hope and resilience.

Is there a certain song that you are anxious for your fans to hear?

I am excited about the whole thing! But one of my personal favorites is a tune called “Young and Able”. I play piano on the track and love the message of the song. IIn the song I am really saying to myself  “screw it, I am going lay all my cards on the table and live my life while I still have the chance”

On the track, “You are the Moon” you are joined by a children’s choir, as well as a recording of your daughter, what a great idea. Where did this idea stem from?

The song You are the Moon is all about my daughter and that balance of what it is to be a parent. She sat in the studio A LOT while we were tracking the album and one day I said “You should try singing on that part” She had never sung with me on anything so I was surprised when she said yes. It was such a special moment for me and then the idea to keep bringing more kids on the album just naturally happened. I was homeschooling my daughter at the time so we just got a bunch of her homeschooled friends to come in the studio and I taught them the part and boom, we had our choir.

I am told you are spearheading an initiative entitled, “I am Enough”, care to tell us a bit about that?

I had the idea at about 2 am last year in October. I wanted to create some sort of event that built women up and raised money for a charity. The event is all women, in the round style. Taking turns sharing songs. I am Enough statements are very powerful and the statement “I AM ENOUGH” was something I always needed to hear and still do. I wanted to provoke thoughts as to what other peoples I am statements are and maybe just thinking about why they are enough? I was connected with an organization called “Women United” – They sponsor young vulnerable girls in Junior High and Highschool. They give them many supports like counseling, nutrition, schooling support to help give them the best start and empower them to believe they can do it. I decided to put a concert on.

I feel the need to bring up the gorgeous cover art for the album, who is responsible for the art? How did the idea behind it come about?

There are a few ladies responsible for that amazing cover! Based on the songs from the album, I knew I wanted the cover to be something powerful. I came to my multi-talented friend Meagan Vandruten who plays in a band (Swear by the Moon) and said “think it would be cool to paint my face silver and gold for the front cover. So, she ran with it and did this cool silver and gold artwork on my face. Then a talented photographer Emily Maxine – captured the powerful look I was going for. The final step was working with artist Kendel Vreeling. She took the cover and painted over top of the photo to create the look you see now! All amazing strong talented women!

Are you planning on touring in support of Silver & Gold?

Yes, I have one shorter Western Canadian Tour in March and have plans in the works right now to head to Europe later this year.

What can someone who has yet to see you perform live expect from your shows?

You can expect honest lyrics, powerful vocals and piercing harmonies accompanied by acoustic guitar or piano, and if I am playing with my band you will hear a few more instruments in that mix. I really enjoy getting to know an audience and having the whole room feel like we are all really connected and together.

I am beyond excited to finally share this new album with everyone. It has been a long process and I just feel so ready to do this.  I am so incredibly grateful to anyone that has supported my music so far. Thank YOU for coming out to shows, purchasing the music and the constant support and love you have shown. It keeps this Momma going, I feel so lucky to do what I do.