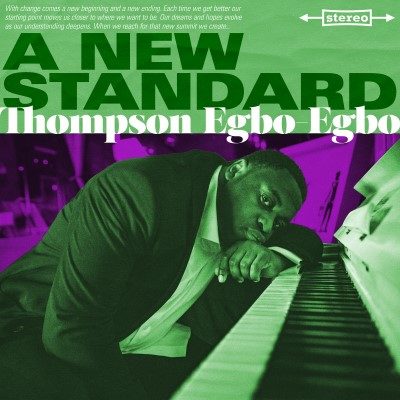 A genre stepped in modern traditionalism, jazz players in every instrumental discipline hone their skills by looking back to essential masters while forging ahead to create their own sounds, styles, and identities.

Jazz, much like “classical” (used in the broad, popular sense of the term, not the specific musical era) can appear “stuck” where audiences become so accustomed to hearing popular jazz standards they become unwilling, or indifferent, to hearing anything new.  New composers or arrangers often go unnoticed as “another version” of “that standard” is rehashed and re-re-re-recorded.

Add the variable that as Canadians spend our time pining for the attention of our looming Southern neighbour (with a “u”), it is difficult for new, Canadian jazz performers to have their respective voices heard.

Luckily for the jazz world, Thompson Egbo-Egbo is up for the challenge and create “a new standard” with his newest release, aptly named, A New Standard.

A New Standard is Egbo-Egbo’s inaugural release with his trio consisting of Randall Hall (bass) and Jeff Halischuk (drums), and for Entertainment One Music as a new signee, a brilliant display of creativity, keen diversity and expert arranging.

A student of Jazz Performance at Toronto’s Humber College and the renowned Berkeley College of Music in Boston, Ebgo-Ebgo has had an impressive composing, performing, recording, and sound design career including composing music for the Canadian Contemporary Dance Theatre, performing with the London production of the popular Canadian stage play Da Kink In My Hair, playing for Quincy Jones, as well as for H.R.H Prince Charles, H.R.H. Prince Edward, and H.R.H. Prince Phillip.

To add to these accomplishments, one of Egbo-Egbo’s greatest career milestones came in 2007 when he was commissioned to produce a medley for that year’s Canadian Songwriter’s Hall of Fame induction ceremony, a class that included, among others, Canadian icon Joni Mitchell.

From deftly combining jazz standards such as “Softly As In a Morning Sunrise” with “Golden Earrings”, to traditional Hebrew love songs such as “Lo Baiom Velo Balyla”, or to contemporary alternative prog-rock tunes such as Radiohead’s “Exit Music (For A Film)”, Egbo-Egbo is not afraid to meld musical influences or shy away from music that strikes his ear, no matter what the genre.

“My approach has always been to play in a way that sounds right to me, while at the same time creating stuff that’s accessible to as many people as possible,” Egbo-Egbo says. “I don’t see it as making concessions to the pop world or any other genre. We all have unlimited access to every kind of music now, so I feel I’m in a position to add whatever elements I’m interested into my sound.”

Commenting on recording Radiohead’s “Exit Music (For A Film),” “I’d heard it for the first time in a long time, and it suddenly struck me how many other pieces I heard within it, from Chopin to Jobim’s “How Insensitive.” Once we worked it out as a trio, we knew we had to record it. It’s simply just a cool song.”

The track “Mr. PC / Spiderman” is a wonderful synopsis of the entire album, combining two classic jazz standards for two completely different audiences presented in an honest, loving, non-head-nodding way.  The tune cooks, seamlessly transitioning from one of Coltrane’s most-well known tunes to being dangerous enough to make Peter Parker’s Spider-sense tingle.  Vince Guaraldi, from Charlie Brown fame, and Oscar Peterson, who wonderfully covered West Side Story, would be proud.

To continue with the Coltrane…um, train….is a delicately performed “My Favourite Things”, a song which, in lesser hands, can quickly deflate by puncture holes of overdone expectations.  Here Egbo-Egbo performs a true-to-the-original cover will adding personal subtleties, such as dynamic pushes and bass line variance, in a way that resembles a version the afore mention Radiohead would perform if they were diving into the jazz world (imagining if they also stayed to their original instrumentation).

An expansive solo using the whole keyboard adds to the emotional impact of “My Favourite Things”, perhaps closer to a Ben Fold’s cover without the nerdy spectacled-glasses vocal delivery.

The closer “Outro” is a track that sonically resembles the end of a show, the Cream-edged jazz power trio vamping as the crowd eases into realizations the night has ended for music and new adventures await.  Egbo-Egbo does a wonderful mix of stride influence riffs with a contemporary note, and syncopated rhythmic, choices (an Oscar Peterson cover or two would be a great choice!).

As a final tonal send-off, Egbo-Egbo quotes “Inspector Gadget” before the track fades out, leaving listeners with a sense of whimsy and humour, the last reminder that “good music” is “good music”, no matter where it comes from and, most times, it is the emotional or memory connection that makes “good music” good in the first place.