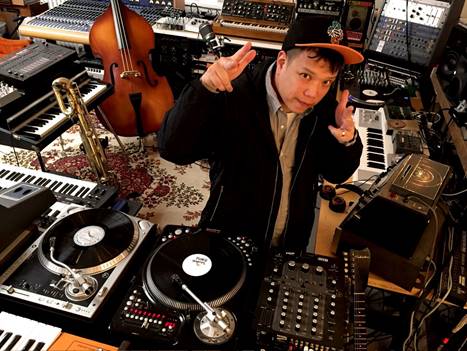 Five Spot Stomp’ is a track from a location called The Corner in the video game. JonJon showed me a concept sketch he had done of this location, complete with a crowd of kids standing around cheering on the battle. My goal was to make a track that would fit the visuals he had created. I kept the rhythm target hits relatively simple since it’s still in the early part (level 2) of the game. Tone-wise, it was fun to make a track that nodded to the beats I grew up listening to when I was in high school, the ones built around a lost loop of an old jazz club jam.  I played some upright bass and drums and recorded them with an old RCA ribbon microphone.  I then re-sampled all the layers into this very strange Vestax 10 bit sampler to get that crunchy sound and added a few scratches here and there. Those are my daughters doing the countdowns in the track. We had a lot of fun jumpin’ around in the studio that day!

Fans of Kid Koala and Floor Kids can catch the DJ on the Vinyl Vaudeville: Floor Kids Edition tour this spring through North America.